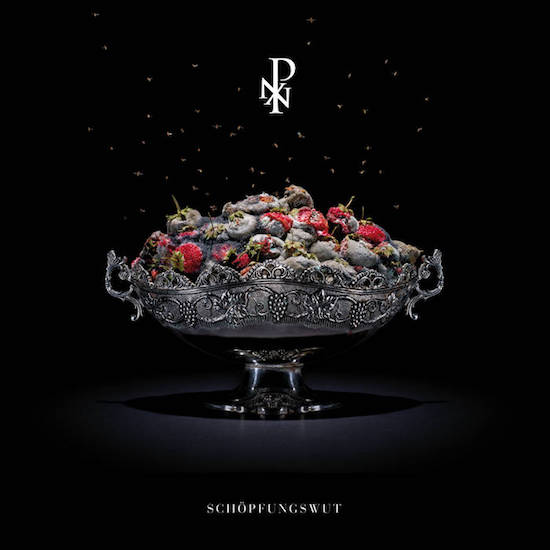 There is some Avant Garde metal that sounds like a bundled mess and others that take a message/concept and use plausible music as a driving force. If this is the way black metal will usher in the new year then it should be a fairly competitive one. The band in question, Porta Nigra, German Avant Garde black metal, fusing folk metal, singing/chanting and a few traditional heavy metal solos to formulate their 3rd full length, Schöpfungswut. This is not one of those overly experimental types of the sub-genre, it's along the lines of second wave black metal; however, there's more than just surface value elements in the makeup of Schöpfungswut. They're not obvious at first but listen long enough and deep enough you'll find the gold.

The fast drumming helps the record progress easily and the ear tingling guitar leads act as a support for it. Porta Nigra's way of going about things could be considered linear in contrast to other bands listed as Avant Garde yet you could extract blissful moments of unorthodoxy. The first track 'Die Kosmiker' which I think translates to 'The Cosmics' really does not waste time; out the gate the foundation is laid for what’s to follow. That Victorian-esque guitar tone and style of playing, leads the way in battle formation towards the closing moments of chanting on the song. Some Avant Garde material lies within the chanting often heard such as on opener 'Die Kosmiker' and 'Die Augen des Basilisken' which I think translates to 'The Eyes of Basilisk'. The landscapes painted are for me the most memorable elements of Schöpfungswut. The spoken/chanted form of vocals are ok, though used frequently does not render the music monotone in the slightest provided reasonable breaks occur during the session. The guitar and drum work stabilize the music with fine arrangements of melodious passages that shape the image and steers the record towards its projected destination.

All together I could give this multiple spins, particularly since the final track 'Schöpfungswut' is set-up as a real grand finale, coating the music with multiple layers of tempo variation. Never the less I feel Porta Nigra missed a trick somewhere on Schöpfungswut. They appear to be knowledgeable enough to step further out the circle given the music here has a safe sort of vibe. It could be they wanted to focus more on atmosphere hence they back-scaled on the experimentation or they wanted a linear sound that would appear familiar to the listener. Either way I still think the music could have had deeper etchings of risk. Luckily the final track made up a bit for the lack thereof with its somewhat unpredictable structure. The record's spoken lines of dialogue amidst the harsh vocals, whispering, singing and chanting were refreshing rather than the standard yell. The traditional heavy metal guitar soloing of the opening track 'Die Kosmiker' was a real shower and could have had higher prominence on the album. Along with the singing and punky rhythm on 'Das Rad des Ixion' that uses the traditional heavy metal approach gives Schöpfungswut the steam to push music from a simplistic level. This is an album that has just enough to carry it over the average mark, still I think Porta Nigra may be searching for their sweet spot in the genre.