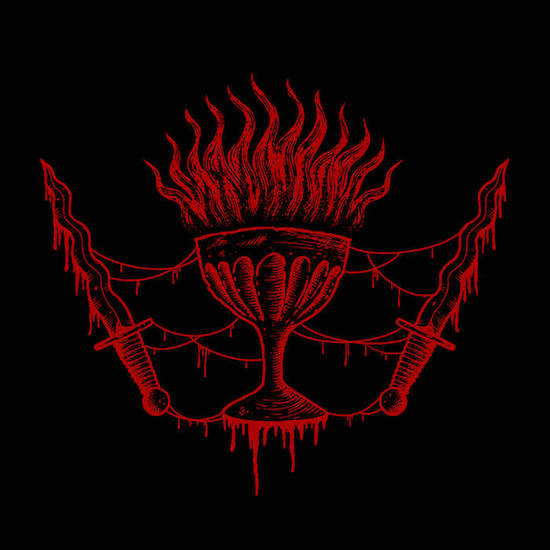 Hexekration Rites put out their debut EP Desekration Manifesto on November 27th and easily gained attention. It's not hard to understand why this was so after listening to this multilayered monolith of desolation. The French duo arrived wielding multiple weapons in their arsenal thus linking them to an exclusive genre was near impossible. Their sound is identifiably black/death metal but their techniques span the genres darkest paths during the 5 track event. For such a short record Hexekration Rites made best of their time and instead of chaining themselves to limitations, extended their reach in preparing a deeper sort of black death metal.

Simultaneously ritualistic and barbaric, Desekration Manifesto plays like a wise onlooker carefully assessing the battlefield before the initial strike. With 'Ouverture' setting the scene, 'The Altar of Madness' develops the already bleak and condemned sound into a Scandinavian-esque black metal parade then morphed with the militaristic drumming and screeching guitar intonations of 'Necrotriumph'. It's here the comparisons and influences slowly begin to creep in as you can definitely hear the fatiguing vocals and stringed patterns of Watain and perhaps even some Negative Plane (composition-wise).

Amidst all this quarreling frenzy sits a drumming that gradually builds its climax moving from steady mid-paced-pounding to savage whacks at the kit giving the march direction and purpose. From 'Blazing Purification' through 'Ascension', that tempo, that climax is multiplied and seems to have erupted, a crescendo of nature, a volcanic landslide of hate, immobilizing the linear pathways of a genre saturated. The final tracks evoke a tension ever building like a Valaraukar demonian sighting, these songs project a sorcery weaponized and fully developed to assault the listener and instill a feeling of trepidation. Hexekration Rites approached the scene with mouth open wide, positioned to swallow and eat the entrails of this deflowered genre. They bring more than the routine echoes of legends past and present, its all here, war metal, heavy metal, black/death metal, 1st and 2nd wave witchery and dissonance for the hungry to fill their bowels with.

Atavism Records have with them an entity bound to swell and burst within the workings of black/death metal; though rudiment for now, much is expected for the follow up. New bands generally take baby steps, Hexekration Rites take monstrous leaps. The competition level just went up, it will be interesting to see if any band/s challenge and manage to outdo Desekration Manifesto.