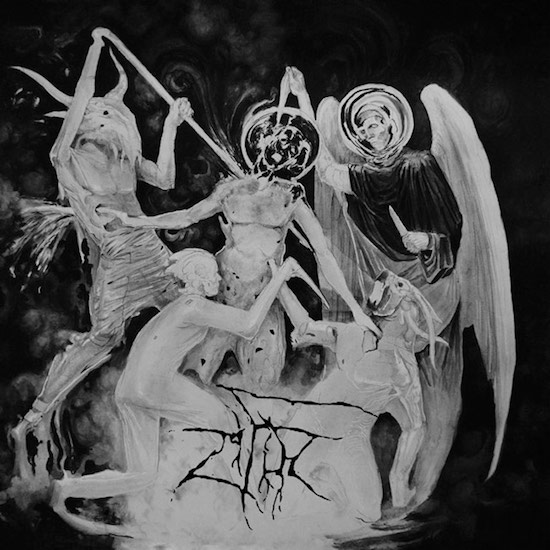 One of the most intriguing black metal albums I've had the fortune of hearing. Due out January 24th, 2020, Demoniac Ethics is the 4th full-length album from Turkish black metal band Zifir. From unorthodox vocals to the accursed chanting to the temperate and calculate thump of the drums and wailing guitars, Demoniac Ethics embodies the fright black metal is supposed to instill into the listener.

This is not your blast beat frenzy type of black metal, there's no rush to meet the end, they're already at the precipice, what you get instead is a record projecting in mantra-like form, demonic oaths, atmospheric desolation and the destruction of divinity. With only the collection of 3 musicians Zifir has unfurled a challenging way of representing their ethical synopsis. Its looks in the other direction of the traditionally accepted form of black metal for the most; we are accustomed to having all the icing of the genre's cake and leftovers too, we've been spoilt, but Zifir refuses to encourage our indulgent ways. They go about this by starving us of our general servings and when that hunger builds to the point of being uncontrolled we're sedated with an adequate amount of delicacies.

Majority of the album maintains a moderate pacing slightly below that mid-paced and doom metal region. Besides 'Chants for Execution', you'll have to wait until 'Spirit of the Goats' before your traditional black metal meal is ready, at least within the drumming department. Not much is said lyrically; however, it is through this epigrammatic form of delivery the band is able to provide considerable weight to the tone of the music given the instruments have adequate room to breathe. Demoniac Ethics does a fine job of constructing walls around the listener making it hard to take a step back from the rhythm; this was a process instigated with the inception of the first track 'Sur' that reeled the listener in with its trance and like an infant to the scent and taste of candy we followed in pursuit only to slip into the trap of its spell.

By 'Empire of Worms' it’s pointless trying to fight the suspended animation and why would you, with passages so ethereal and tempos triggering ecstasy levels, you'd be neglecting yourself of solace. As the glimmer fades further into a space of a blackening pitch with each passing declaration you can't help but wonder if you're even within the same realm of time. 'Chaos Clouds', 'A Bleak Portrait', 'Insects as Messengers' (that's a bad-ass song title), deliver the final blow critical to the lasting impression of Demoniac Visions and lives up to the majestic artwork. The songs have a very introverted, self-preservationist aura about them, meaning they somewhat appear to ostracize or turn a cold shoulder to outside interferences or characteristics.

There's no arguing its black metal done in sincere philosophical spirit; though simultaneously, persists the feeling of distaste towards the genre. I assume this has to do with the stealthy tempo that dominates Demoniac Ethics' run time, contrast to many whom prefer a speeding onslaught of instruments yet failing to master accurate trajectory of their message. Working in synchronized coordination, the drumming, riffs, vocals and bass are present as being delicately entwined with each other yet wrathfully seeking out emancipation from its unified musical stronghold. Demoniac Ethics is a record within its own monarchy, impervious to ingeminate echoes and fundamentalisms.