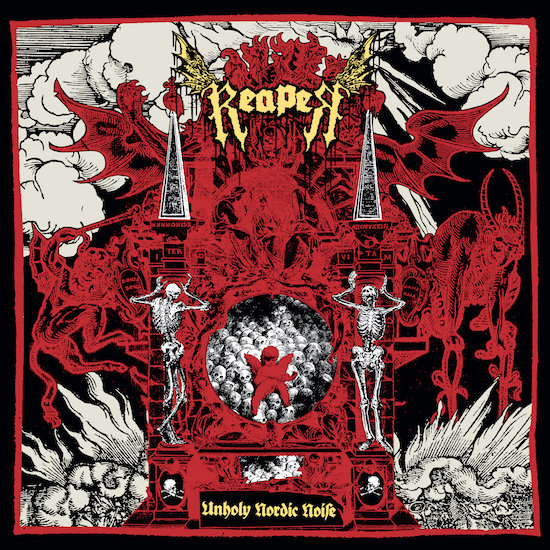 Sweden has an ever growing list of excellent bands in metal, and they aren’t stopping anytime soon, as proven by the debut opus of underground blackened speed joint Reaper.

This is a fairly new band and its lineup names are still unknown to the public; it’s composed by two individuals known only as Duca the Impaler and Ityphallic Flaggelator, the former handling drums and bass and the latter handling guitars and both share vocal duties (although it’s hard to tell). Like I mentioned before, the band plays blackened speed metal and they do it in the vein of the undisputed pioneers of the style: Nifelheim. One thing I’ll address from the get go (which is also the negative side) is how many blackened speed bands tend to blend together. Most of these bands take their cues from Venom, Motörhead, early Bathory and Iron Maiden but don’t really add anything new beyond the trademark shrieking vocals of black metal and being less melodic and more dissonant with their music.

While Reaper makes up for that shortcomings in other ways, they still do fall victim to this trapping of this peculiar sub-subgenre since they follow the same playbook. Fast and aggressive pace with a spooky atmosphere, very guitar-centric, with a focus on delivering memorable and catchy riffs and hooks and have an overall vintage sound in the production of the music. All well and good but sadly repetitive and overall done already. As a side note and observation, it’s no coincidence that many bands in this style as well as its blackened thrash sister sub-subgenre tend to have very scarce discographies, with less than 4 or even just 2 full length albums and focus more on live performances. Those bands play live, do a myriad of split releases, EP’s and contributions of cover compilations, almost as if they’re aware that their novelty would dry out if they stretch their sound beyond 3 albums.

However, Reaper have 2 major strengths that make them a worthy band for the blackened speed style as well as have a proof that this style will always find a way to survive by being immutable. The first strength Reaper display is in their musicianship. Many bands in this style overcompensate their admittedly lacking expertise by playing fast and aggressive. Reaper don’t have this inherent problem; the speed of their instruments feels natural and honed, the guitar work of Ityphallic Flaggelator manages to shine through thanks to the stripped down and minimalistic qualities of the music. It’s very DIY and through the limitations of the production, you can appreciate how effortlessly Ityphallic Flaggelator can maintain the speed and brutality and abrupt stoppage for key sections of each song by changing speed or going even faster. The same can be said for Duca the Impaler’s drumming. It's relentless but also very proficient; (aside from the blast beats and d-beats) he excels in using the whole kit and his skill shines in the cymbals throughout the whole album, and again, because the production is deliberately lo-fi and vintage sounding, the band as a whole flex their talent and passion.

However it’s not perfect. For as great as the guitar and drumming sound with this raw production, it is the vocals that are the downside. They sound very distant and as mentioned before (while both Duca and Flaggelator are credited for sharing vocal duties) you can’t tell which is supposed to be the main vocalist. The vocals by themselves are great, very harsh and raspy gutturals on the higher pitch, they perfectly complement the music but you really can’t tell which of the two members are the lead and backing vocals and the production has them buried and sounding more compressed than they probably need to. It’s not a complete deal breaker; they do the job and are too distinct to not notice. The real casualty is the bass which is near nonexistent in the final mix of this album. As someone who has an appreciation of the bass this does bother me a bit, but being fair, the overall product as a whole has all the parts working together and this is what makes this album worth the buy. It may be a very niche style of black metal and if you’re an experienced metalhead, this style probably won’t be all that different, but it’s a good time all around, and worth experiencing.

Abbath plays speed metal, or so the vocalist would have you believe after hearing Unholy Nordic Noise by Reaper (Sweden). Either that or Abbath has a twin. I've listened repeatedly to Unholy Nordic Noise that at first appeared to be lacking and that’s only cause my attention was more occupied with the vocal aspect of the record. The front-man of this band could probably do vocals for Immortal as it stands, and let Demonaz handle everything else, that’s how identical they are to Abbath’s. Straight out of ‘Grim and Frostbitten Kingdoms’ I would not have once imagined that somewhere exists an individual that could replicate the vocals of Abbath with such precision. You might say Dagon of Inquisition does that, but you’d be mighty wrong because Dagon’s are more reminiscent of Tibetan throat singing.

They’re a good handful of standout songs on the album, these are the tracks that gave more freedom/time for the guitars to function and take hold of the music. You’ll find that longer tracks are more exciting simply because there is more to look forward to in terms of riffs, and as for the vocals they remain consistent throughout so that feeling of listening to Abbath never clears. More straightforward titles such as the opener 'Hero of the Graveyard Flies' and 'Severing Tentacles of Faith' have high playback value and even challenge those with more rhythmically driven passages. The drumming is basic thrash/speed metal, no surprise there; and the guitars are excellent both in rhythm and soloing departments.

Some of the best guitar work could be heard on 'Hero of the Graveyard Flies', 'This Crystal Hell’ and 'De Krälande Maskarnas Kör'. There is also a tug between Swedish death metal and Motorhead mechanics going on with the guitar formulas and tones. Unholy Nordic Noise is short, roughly around 29 minutes tops, it’s not too technical, easy to follow despite the production that would appear as a turnoff to some and is neither too candid, thus avoiding a run of the mill tag. The musicianship itself is decent and the production value is intentionally fancy, or discernible but with a wrecked edge. Unholy Nordic Noise is an album that does its job well enough to garner considerable attention.