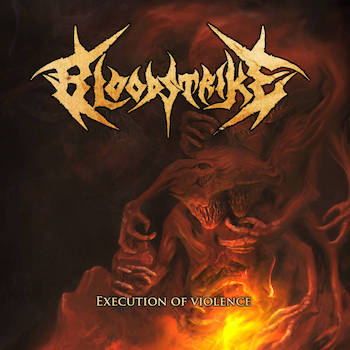 This starts off slow (tempo-wise) but progresses into much more dynamic riffs. The guitars sound a lot like the Swedish death metal sounds, though it's not duplicate riffs. They've been in their own, a fine progression from their debut. I enjoyed the album immensely, there was nothing boring about it. Of course, the vocals didn't really change out of Holly, just guttural vocals. But it suits the music well. The songs aren't full of too many variants in tempo (as stated), not many solos really. Simply heavy guitar. The vocals go well with the music and the riffs are in a league of their own. They orchestrate brutality mixed with groove type of songwriting.

I really enjoyed this album the whole way through. You don't get lost in sounds, they keep the music interesting. Unique style, even though they mimic that Swedish tone. I think that they really went one step up than on their debut. Their debut was solid, but it had some gaps in it. Here, throughout the whole release there were no gaps. It was solid the whole way through. Sounded good on a positive note from the intro and ending with the prologue. I cannot say in all honesty that this was a "perfect" album, it just is way more solid than its debut. They really did some improvements here.

I don't think that anything needs to be changed. I think that the band went up a notch and a half here. The brutality factor, originality in the songwriting, unique guttural vocals, solid production, no need for rating change. I think that Bloodstrike keeps progressing as long as they stay true to their roots they'll find their way successful in the death metal world. Their maturity is quite apparent here. I'm not sure of the lyrics, but it doesn't matter at this point. They did everything right on here. I can't say anything but positive things about Execution of Violence. It simply is a masterpiece in sounds and the more i listened the more it became apparent that this deserved a perfect score. It was just that it initially was too slow for me. But once really hearing the riffs and vocals, it became more evident that this album production and all was worth a perfect score.