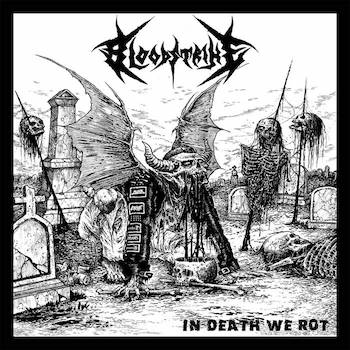 You wouldn't think that the vocalist is female, especially since it's wholly guttural. I like the sound of her though, she compliments the music well. The music I liked the most. The album itself isn't very fast, there are a lot of songs that aren't quick but they're still good. The guitar riffs are pretty awesome and original. A lot of them utilize ultimate power chords and tremolo picking. A lot of the guitar compliments the vocals soundly. The production isn't too raw for a debut. It's actually pretty clean. I liked it. There is some aura to this album too. It's quite dark and depressing. That was mainly their goal for the album I'm sure.

Not too interested in the lyrical concepts as much as I am the music. I think that the fact that the songs are at least 4 minutes or more in length. It makes a solid release. It just seems though as the songs progress there are some vocals that were a tad bit overdone. That doesn't mean that they're bad, just sometimes they're a little overpowering. And an echo that goes around the sound. That makes it to be more atmospheric. I think that they're sampling sounds here. That isn't wrong, they are incorporating depressing vocals to a dark guitar melody. And the drums are filled with double kicked frenzies.

The main thing to keep in mind here is that since the vocals are female there's a limit or possibly one to get totally guttural. However, I've heard brutal death metal acts with females that are vocalists. It just seems that there can be a built-in bias when putting a female voice to death metal music. In some respects, this vocalist sounds a little like Alissa White-Gluz (Arch Enemy), but not entirely. The band’s music is strictly death metal though, no essence of melodicism in store here. These guys want to stay underground. And it's good the album is 45 minutes in length because you get the feel that they're not going to cheap out on their listeners.

I bought this CD a while ago and I'm just getting around to forming an opinion about it. I like it, and I like the band. I would encourage death metal lovers to give it a try. The music is pretty original and invigorating. At times too very dark. That's the whole point: BRUTAL MUSIC! The tempos aren't the fastest, they're just groove laden and intriguing. I liked all of the songs. They all have something special about them. They're incorporation of unique music to the song's structures make it the most interesting. They definitely show their influences not just Alissa of Arch Enemy, but darker bands in the death metal genre.

The first few listens had me hooked on the aura of the music. If you want to show the band support, buy the CD! I'm sure that the band is progressing as musicians. They put together one hell of a good debut. They really kick ass and the vocals are an acquired taste. Own this album!