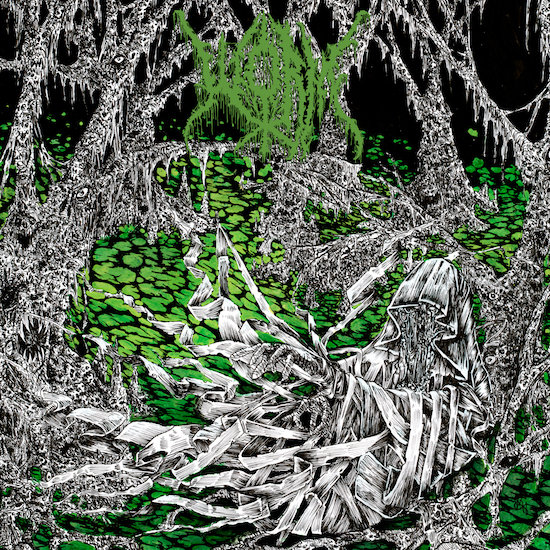 It comes as a disservice Worm is branched under black metal; personally, after my time with Gloomlord it could not be a more narrow characterization of the band and their music. Krypts, Gorement, Spectral Voice, Timeghoul, Celestial Grave, Macabra, Wooden Stake, Perverted Ceremony, Incantation, Mortuary Drape, Disharmony, and 80s guitar solos share the infinite space with Worm on Gloomlord.

Black/death/doom for grownups only; you'll need to have heard many interstellar curses before getting even a mile within the radiation of this record. Not for a beginner’s ears and is by no measure an introductory album of any sort. Gloomlord is the woven fragments critical to the identities of extreme metal genres. It’s no secret the members in Worm have a love for death/doom metal (being from USA, Florida specifically), but they also indulge in war metal, black metal and doom metal, thus given, they went ahead and established a multidimensional sphere to channel their appreciation for the different forms of extremity, but more so, fetch into existence their dismal visions. Reverberating death/black metal snarls and growls lunge at you predatorily; super-terrestrial guitar licks and drumming combinations with a pinch of melodicism are waved-around like wand in hand, at any given moment shooting sorcerian beams that’d evaporate all sentience.

Dimensions ahead of the institutionalized, prosaic-echoes of black metal, ‘Putrefying Swamp Mists at Dusk’ maneuvers shackleless the marsh necropolis; its footprints traced to many a predecessor and current lifeforms of the morass, yet not the creature’s sole identity. Magnetized to the beauty of its own reflection this track displays a confidence excessive for an intro, setting the bar higher than assumed but would pale in comparison to those soon to be unveiled in the clearing mist. ‘Rotting Spheres of Sentient Black’ would have you believe Worm has been playing this sort of material for years, in strong opposition to coercion, the flux here is sublime with every element falling into place without trouble or agitation. A frequenting occurrence on Gloomlord this, implying the amount of thought preceding the arrangement of the music. If you took a step away from microscopic examination, you’d still find an overall semblance courtesy of rhythmically logical transitions, reinstating how pertinently fastened into position all segments of the music are.

I’d bet just from the way ‘Apparitions of Gloom’ opens you could have never surmised the serene and dreamlike guitar work at the climaxing collective of motions. The objective of the work is peaked for a period like a storm at its most critical phase, ‘Apparitions of Gloom’ elevates to divinity, a juncture of glory. ‘Abysmal Dimensions’ sees the album off to a close in exclamatory demeanor, still no defections raise to surface on the record, all that had been put into place remains securely seated and undisturbed. The dip into slightly melancholic terrain is birthed following the spacy torrent of ‘Melting in the Necrosphere’; ‘Apparitions of Gloom’ shows Worm can manage and conduct the recording’s fluctuating temperance, a thing of spectacle. The songs don't appear conditioned to appease any particular style, instead juggled about but with care to not fumble.

Not having the time to acquaint oneself with Worm’s prior record, Evocation of the Black Marsh, I’d feel as if an opportunity to hear how the band has progressed since its release in 2017 and how it stacks up against the current effort is critical to Gloomlord. I understand the band was originally a solo undertaking that being of front man Fantomslaughter; however, with this record a new member Equimanthorn, has aligned himself with the visions of the main-man. Hence I have found black metal projects to garner a greater deal of success when less hands are involved in the crafting process, and this effect is projected on Gloomlord.