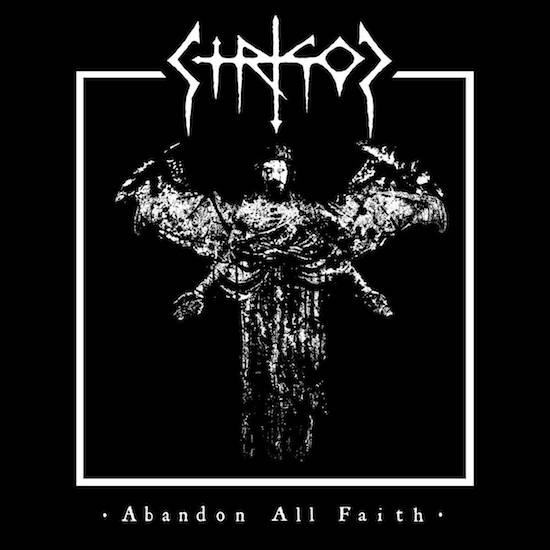 I must admit that I like all those death metal side projects, carried out by the sad men from Paradise Lost. I like them even more because of the high level of "Medusa" which indicated that their mother band also benefited from the side games of Nick Holmes and Gregor Mackintosh. Of the two, Gregor seems to be more productive one. When, after three solid albums, the presumed expiration date of Vallenfyre arrived, the guitarist did not wait long to form a new band.

Mackintosh formed Strigoi together with bassist Chris Casket who once scrolled through the lineup of Extreme Noise Terror, he also toured with, you guessed it, Vallenfyre. Drum parts on the debut album were played and recorded by drummer of Paradise Lost (and, what a surprise, Vallenfyre), Waltteri Väyrynen, who did a splendid job. This way, everything stayed in the family. Mackintosh and Casket also co-produced the material, while sound wizard Kurt Ballou, who also worked on the last two Vallenfyre albums was responsible for the mix. The result is superbly legible, and at the same time still distinct and natural death metal sound of Abandon All Faith.

The key to the album's success is compositions. Strigoi is, of course, a natural continuation of the path chosen by Vallenfyre, which is clearly heard on several levels, especially when you consider the 2017 "Fear Those Who Fear Him". However, while the death and doom metal mix performed by the project preceding Strigoi sometimes tended to silt up one-dimensional gloomy tracks, Abandon All Faith brings a whole range of new (and better!) ideas. Short tracks are nothing new to Mackintosh, but the less than two-minute "Nocturnal Vermin" brings unprecedented, almost d-beat power, boosted by slightly industrial reverb and carried by furious work of drums. Even shorter "Throne of Disgrace" was built according to the best canons of classic British death metal, and equally good things happen in the lively "Seven Crowns". There is more life here, more energy, and the head is eager for headbanging.

At the other extreme end are equally successful, long-lasting, doom rollers - "Carved Into The Skin" and the closing album, epic and bone crumbling "Abandon All Faith". They are a great counterweight to the rest of the material, constructed around catchy, though free from all sweetness, death metal. The best example of this could be single material "Phantoms" or the equally unique "Plague Nation". I have always liked the sound of Mackintosh guitar, who can smuggle his unique style not only in Paradise Lost, but also in more underground playing, which can be heard perfectly in Strigoi. One cannot fail to mention the industrial inclusions heard here and there, previously announced in the interviews, which, although they only play the role of additional flavors, work very well, for example, in "Parasite" or in the title track mentioned above.

All these ideas make up an extremely appetizing mix. Abandon All Faith remains in the drawer of death / doom playing, but it is neither as raw nor as gloomy as Vallenfyre, whose formula along with the third album began to run out. The creation of the new team apparently allowed Mackintosh to gain some distance and catch the wind in the sails again, which came out good for Strigoi. This is one of the best albums of the past year, not only in the debut category.