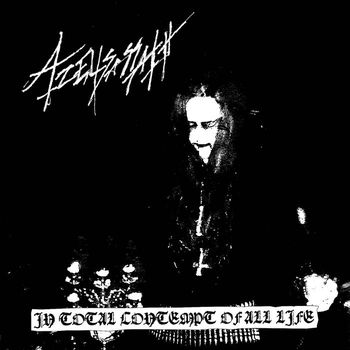 The sulphurous stench of black metal appears in many forms and the Swedish duo with the almost unspeakable name Azelisassath presents its own interpretation. This is not to say that they have found their special, experimental approach. The opposite is true, In Total Contempt of All Life is a typical black metal underground output. Nevertheless, the Scandinavians dish up their own icy cocktail while following the tried and tested methods. This is what makes black metal fascinating: the seemingly narrow frame leaves more room for creative thoughts than it seems. And we can be sure that more exciting, yet traditional variations are yet to come.

Azelisassath do not strive after new extremes. Black metal has this excessive element in itself. That makes it easy to spread the vibes of misanthropy as soon as one has completely understood the spiritual core of the subgenre. Obviously, the artists have quickly learned the laws of black metal. The scornful, partly inhuman voice coalesces with the lava-like instrumentation and musty atmosphere flirts successfully with insensitive harshness. The duo combines the well-known components masterly and the production supports the underground charm of the material. The drums, for example, fight a losing battle. Their place is the backyard and sometimes I need a hearing aid to know they are still there. But it belongs to the mysteries of black metal that usually important details become totally irrelevant as long as the spirit of the music is expressed convincingly. Needless to say, that technical tricks also do not play an essential role. The dudes are no amateurs, but high-sophisticated song structures are not their playground. On the other hand, we are still talking about black metal of the true Norwegian / Scandinavian kind and this means that the conventional verse-chorus-verse pattern does not occur as well. At first glance, In Total Contempt of All Life seems to be another primitive product, but appearances are deceiving. The album sounds raw and intense, bitter and grim, but it does not concentrate on overly simple designs.

The highlights, namely “Malignant Soul Rape”, “His Desecrating Evilness” and “Path of Misanthropic Hate”, rely on their good flow, their high degree of dedication and their pureness. One can discuss about the question which band was most influential on Azelisassath’s way of proceeding, (the true) Mayhem, early Pest (Sweden) or a combination of Urgehal and Nifelheim, but believe me, this is a monolithic output. External inspirations from beyond the black metal universe are not identifiable. The morbid severity of the compositions destroys each ray of light before the sun has the smallest chance to rise. Some desperate screams underline the total negativity of the material, but melancholic sequences do not shape the album. This work appeals to the darkest spots on your soul and only less important sections, in particular the gloomy yet actually superfluous intro and outro, do not take complete possession of the listener’s mind. However, it feels good to listen to this album and the picture disc ensures a visual charm as well. Only the subgenre-typical, never-ending flood of countless newcomers prevents that Azelisassath’s name is not better known.