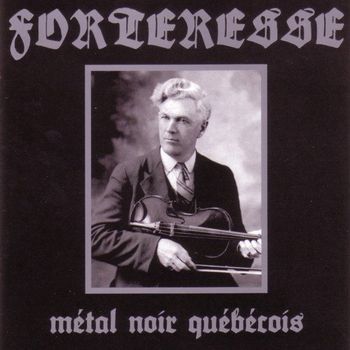 These guys have great luck. Indeed, they can be happy that they are not Germans. Otherwise, they would provoke a wave of indignation. The verdict would be easy: f**king Nazis, narrow-minded idiots that still live in the past. The know-it-alls would say that at least the titles of the second, the fifth and the sixth track show the anti-human attitude of the dangerous nationalists. Shame on them and their inadequately autochthonous messages. But, as mentioned before, Forteresse do not originate from Germany. The two musicians praise Quebec and they do it in an excellent way. That's particularly noteworthy, because they put all their eggs into one basket. Sprawling leads characterize the six songs almost exclusively. These leads are explosive, stormy, majestic, omnipresent, dominant, melodic, fanatic and sometimes archaic - to mention only the most outstanding traits. The lead vocals, recorded with a lot of reverb, also contribute a substantial feature, but the fairly monotonous, throaty and menacing voice does not deliver this wide range of emotions that the guitars offer. Anyway, the vocal performance is anything but bad. It reflects the passion of the duo in a clear and explicit manner.

Surely, Forteresse are inspired by Norwegian black metal in its purest form, but they possess an individual touch as well. The leads do not transform this kind of malignant fierceness that made "De Mysteriis Dom Sathanas" or "Pure Holocaust" so exciting. It seems as if the beauty of Quebec shimmers through each and every song. This does not mean that the music of Forteresse suffers from excessive softness. By no means! The outstanding speed of the songs and the dense sound speak a different language. Incidentally, the production cannot score with transparency or clarity, but this does not really matter. The sound of the guitars mirrors the defiant mentality of the band and this gives the album its special flair. Forteresse make no compromise and go their own way without forgetting to integrate the necessary amount of melodies. This makes the actually more or less extraordinary song structures easily accessible. The unusually long runtime of the single tracks also does not constitute a problem. Lengthy sections do not arise, and this is anything else but a matter of course.

The exceptional artwork honors a native violinist and composer who influenced North American folk music massively. The opener, the third piece and the title track have a complying intro. I guess that I understand the underlying intention. However, I must say that the abrupt introduction of the guitars leaves a slightly strange impression. It seems as if the six strings kill the violin mercilessly. These caricatures the original idea of the band. Yet shit happens and this is just a minor detail. All in all, the album definitely leaves its mark. Forteresse provide evidence that they have courage, compositional talent and a clear vision. It comes therefore as no surprise that "Métal noir québécois" holds very strong tracks.

"Une nuit pour la patrie" is a prime example of the rebellious art of Forteresse. While creating an original melody, the siren-like leads unleash a North American hurricane of the finest form. This piece holds more than ten minutes of full dedication and every single tone fit. One could describe further tracks, because all of them reach an amazing level. Just lend an ear to the overwhelming title track with its breathtaking speed. Yet I suggest cutting a long story short, because, as mentioned above, the entire album thrives on the guitar leads and the hook lines that they create. Add to this the fact that the listener is confronted with a work of passionate debutants who are bursting with energy and you can hopefully imagine how this full-length sounds. It's a monolithic monument that does not focus on variety, but its fanatic brilliance has an enormous impact. Sargent D. told us to "Speak English or Die", but, as you all know, he has retired a long time ago and I guess he sits in his rocking chair with warm clogs, thinking of his youth and poetic love songs such as "Pre-Menstrual Princess Blues". Be that as it may, the patriots of Forteresse disagree with his radical message and that's absolutely understandable, even for (some) Germans.

Post scriptum: I am sorry that I did not write another review for the new Metallica album.