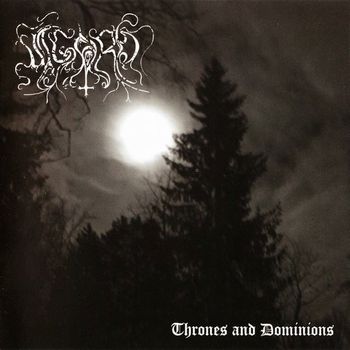 Right now, I reveal a secret. You will surely be surprised, but Finland – believe it or not – houses some bands that play black metal. Two or three, maybe even four? Who knows? Bollocks aside, I did not expect that Utgard is still alive, but who am I to think that M-A could go wrong? Either way, Thrones and Dominions deserves the first review, not only because of its apt artwork. The CD was released eleven years ago, and no successor has seen the aurora borealis so far. That is unfortunate, because the band has proven its solid skills. Okay, the long player from 2008 is no masterpiece of Finnish blackness and everybody who does not possess the album has no reason to cry out in pain – at least not because of the missing full-length. However, the vast majority of the pieces combines a swift tempo with simple yet driving guitars and the mean shouting of the vocalist. This tried and tested method leads to a coherent overall picture.

It’s definitely no grave error, but the album lacks intensity. This is not the sound that makes churches burn to the ground. It’s hard to identify the cause for this deficiency. Neither the production nor the compositions fall prey to obvious defects. Admittedly, the production does not present the ultimate amount of pressure and a few compositions like the pretty melodic “Black Sun” pass by without telling a fascinating story. But all in all, the album can be classified as a more or less typical Finnish (or let’s say Nordic) black metal work. There is nothing wrong with the general approach, although the band should more often give full speed ahead. Maybe they should have state their position more clearly. Their way of proceeding leads them directly between a rock and a hard place. This is no raw black metal, but symphonic elements do not characterize the work as well. Only in rare moments the band creates a gloomy atmosphere (“Ravens” sounds like a good addition to the first tracks of Carpathian Forest’s “Defending the Throne of Evil”) and that’s a pity, because most songs indicate a robust potential. The rumbling, fast-paced opener or the equally aggressive “Sub Umbra Dei” promise more than the album can keep.

I like the album. It does not shine with excellent material and it will never enter the inner circle of my most appreciated records, but it also does not suffer from pompous extravaganzas or inadequate experiments. Yes, some guitar is pretty generic and ordinary. The rather rarely used keyboards also do not open the doors to previously unknown dimensions. Yet this does not mean that the album in its entirety sounds stale. Nevertheless, it does not come as a surprise that it did not stand out in the constantly impressive flood of black metal releases. Perhaps the guys are working on the ultimate black metal classic for the past eleven years? If so, I want to be the first again to review it.