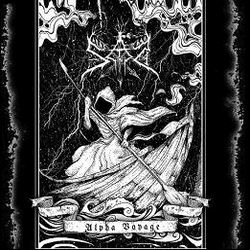 The Greek duo Sad has a surprisingly wealthy discography, but its status is lagging behind in view of the flood of releases. Okay, the two guys with the clear distribution of tasks (one for the music and the instrumentation, the other for the lyrics and vocals) do not deliver crappy stuff, but their four track EP from 2015 makes me a bit, well, sad. Especially the overlong opener bores the listener already before the album has really been kicked off. An excessive intro with tiring acoustic guitars and a pretty meaningless melody opens an instrumental that lacks insanity and fury. I don’t understand the intention behind this number and I also cannot ignore that the third song ('Void') starts with pretty defensive guitar lines as well. Admittedly, here the cruel, nagging vocals add some pitch-black paint splashes and the song gains intensity and velocity as it progresses. Nevertheless, why doesn’t the band go the whole hog right from the beginning?

Sad’s configuration of black metal cannot conceal the love of its creators for the prototypical Norwegian form of the subgenre. In its wildest moment, the album sounds like (more or less) old Darkthrone without reaching the “Transylvanian Hunger” fury. Especially 'Riding the Rays of Darkness' does not lack aggression and the way the guitar lines develop show the path to the old school of blackness. Slightly repetitive, but performed with passion, misanthropic and grim, that’s how the highlight of Alpha Voyage appears. Speaking of repetitiveness, maybe it was no good idea to stretch the material excessively. The four-piece boasts with a playtime of almost half an hour, but we know that quantity and quality have, despite their similar spelling, nothing in common.

The sound gives no cause for alarm. Alpha Voyage achieves solid degrees of pressure, power and rawness. Thus, it is all the more regrettable that the mostly soft beginnings of the songs hurt the density and overall picture of the EP. Maybe Greeks (except Spartans) are generally not immune against opulent designs, at least when it comes to black metal. Sad do not integrate ritualistic elements, but they love to wallow in their own leads, for better or for worse. On the other hand, the two artists perform pure, authentic black metal that seems to come directly from their stricken souls. Sad avoid frippery, they do not look to the right or the left and if you do not expect the next milestone with every new album, perhaps Alpha Voyage will meet your expectations. I’m not totally convinced, but I don’t think that this is the crucial thing here.