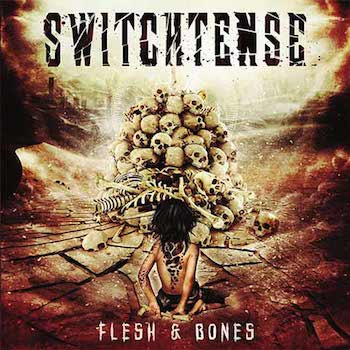 Buy on: Bandcamp
Type: Full-Length
Release Date: April 8th, 2016
Label: Rastilho Metal Records
Genre: Groove, Thrash
1 All Or Nothing
2 Flesh & Bones
3 Super Fucking Mainstream
4 Walking On The Edge
5 Ignorance Is Bliss
6 Old Souls (They Are The Ones)
7 Monsters
8 Six Feet Underground
9 One By One
10 Free Falling
MetalBite on YouTube

At the beginning of each new year, I have a tradition of raiding several sources online in search of new music. I have a pretty basic way of doing this, but it’s effective, and it leads me to bands like Switchtense.

I’m aware that I’m late to the party, as Switchtense have been around for a while now. Since 2004 in fact, so they’re not exactly new to the scene. They were however, completely invisible on my radar - our paths just never crossed. So at the beginning of 2019, I came across a few of their songs, liked what I heard, and threw them into a Spotify playlist, promising to come back to them when I had some more time on my hands to give them a proper listen.

Fast forward 11 months and I have finally sat down with these guys, prepared to give them that proper listen I had promised.

I admit that I waited 11 months too long, because most of the output on Flesh & Bones is first class, no nonsense death metal which is getting to be a bit hard to find these days.

Flesh & Bones is what I like to call a modern death metal album, with just enough of a nod to the old school. Their sound is polished, punchy and clean, they’re fast, accurate, and devastatingly heavy when they want to be. But what Switchtense does that a lot of death metal bands forget to do these days, is that they play simple riffs designed to get your head moving. Let’s not bullshit ourselves here - if you like metal and you listen to this album, you are going to headbang at one point or another. Let’s just get that out of the way. And if this somehow doesn’t get your neck moving, you should probably move onto another genre. Because the problem is you. The problem isn’t Switchtense.

Two of the main things that sold me about these guys are the sheer riffs, and the superb drumming of Antonio Pintor, which at times reminds me of Dave Culross’ drumming. In fact, I get a slight Malevolent Creation vibe here, think “Envenomed” - the drums have that same kind of punch and solidity, that force which just drives the riffs forward, and outstanding kick drum work. The riffs are another thing I absolutely love, simply because they are exactly that - simple. There’s nothing crazy going on over here with the guitar work, so don’t come here expecting guitar wizardry in the realms of Decrepit Birth or Spawn of Possession. These guys aren’t about that, and that’s a good thing. Switchtense play to their strengths, which is making simple - yet extremely effective death metal.

It’s refreshing. These guys have just proved that you don’t have to do anything new or crazy to be noticed, you just have to do something, and do it well. And if you do it well, that’s far more important than doing something you’re not meant to be doing and just faking it. Play to your strengths, brush all of your weaknesses aside. Switchtense play kick ass death metal with loads of riffs that will make you want to get up and smash things. The general tone and pace of the album is fucking fantastic, never a dull moment with these guys, and even though their riffs aren’t too crazy, the song arrangements are outstanding, so it’s easy for them to hook you and keep you listening, an extremely tough thing to do with me when I am listening to music these days. Because really, I’m a veteran at this point. I’ve damn near heard it all. It’s hard to catch me off guard. But these guys have done it and I applaud them for that.

Seasoned metal fans won’t find new ideas or themes here, but the ideas and riffs presented here are done in such a fine way that it’s impossible to not appreciate. I really love the vibe of these riffs, I can’t stress that enough. When “All or Nothing” really kicks in, it’s a spectacular moment, at times reminding me of old Kataklysm, back when they didn’t suck. I’m not going to get into individual tracks as you should discover the music for yourself, but I will say this, pay close attention to “Ignorance is Bliss”, “Old Souls” and “Six Feet Underground” - the second half of the album is actually better than the first. It just kicks off very nicely and after the third track you expect it to lose some energy, but it never does. It just keeps increasing and increasing, this stuff is intense in the best possible sort of way. The verse riff and drum pattern in “Old Souls” is just fucking mind blowing. Not overly complex, but certainly not simple either, I just love the sort of groove these guys manage to pull off.

Well done, Switchtense. I’m keeping a close eye on you from now on.