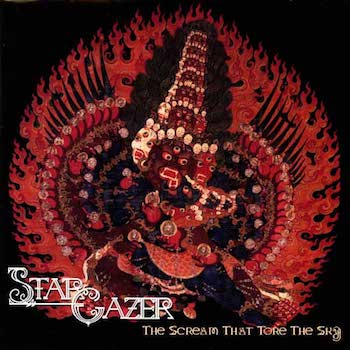 Now, a fair amount of seasoned death metal fans know of StarGazer, but even still, I very rarely see bands pay homage to them in their "FFO sections," and it seems like a lot of fellow reviewers fail to mention them when citing obvious influences in newer bands like Blood Incantation or Ulthar. This is absolutely perplexing to me, because, indeed, StarGazer has had a massive influence on a lot of these modern death/black outfits we've seen emerge in the past 6-8 years. Their ferocious blend of death, black, and thrash with good amounts of melodic, progressive elements and heavy dissonance is often followed to this day. And, those who do know of this band rarely have anything negative to say. It seems this album achieves love all around from people who have listened to it. But I never quite hear people comment on just how "ahead of its time" it was.

StarGazer is an amalgamation of different sounds blended into a surprisingly neat package. It features influences from Death, The Chasm, Atheist, Gorguts, Morbid Angel and plenty more with a healthy dash of black and thrash metal. Of course, with the aforementioned palate of bands being brought up, it should come as no surprise that this album is fairly technically proficient. Damon Good and Denny Blake put on a show on this album, handling guitar, bass, drum and vocal duties between the two of them. Now, I do say this often and take it with a grain of salt because my favorite genre of music is technical death metal, but this is not your average technical death metal wankery on display here. Rather, the technicality is infused with the thrashing blackened death madness to create a sonic whirlwind of explosive musical wizardry and unforgiving brutality. No stupid noodling and "whoa dude, play that as fast as possible" bullshit on here. It's extremely melodic, but not in the sense that it sounds like In Flames (yuck!) I almost get a sense of Mi'gauss type melodicism in this, in the sense that it's true traditional heavy metal fused into tech death.

The bass and drumming on this album is brilliant. Both are mixed in well, with the bass being surprisingly audible and it adds a completely new dimension to the album. I'm still not aware of whether it's a fretless or not, because I am extremely stupid and not good with music (why are you even reading this anyway? My opinions suck!), but either way, I fucking love the way it's played. It acts as the lead guitar at times and plays a lot of intriguing melodies. The drumming is far from standard, it's very technical and explosive and helps bind the frantic riffs together seamlessly. And the riffs and melodies from the guitars are ones worth noting. Very rarely do bands have the capability to cram this many good melodies and riffs into just one album, but StarGazer achieves it with ease. The vocals, on the other hand, actually aren't that boring. Are they the greatest ever? Far from it. But they utilize both highs and lows and, while they rarely have ever a catchy structure, are still memorable and aren't just background noise - at least not all of the time.

I would recommend this to really any fans of death metal that don't mind some technicality. It really is fucking catchy and filled with a lot of great songs. Even the interludes have one or two good parts, which is absolutely shocking to hear because interludes are the single worst thing in music. Perhaps it's not the heaviest of albums, but it sure is spastic and, for the time, pretty damn original, and its influences can still be heard to this day in a number of bands. StarGazer is actually still around and has put out albums, even one this year as I am writing this, but I just actually haven't invested the time into listening to any of them just yet. I'm probably doing myself a disservice - if they're any bit as good as this one, they are most certainly worth listening to. Uncompromisingly ferocious, and worthy of a few listens.

Favorite song: 'The Scream That Tore The Sky'