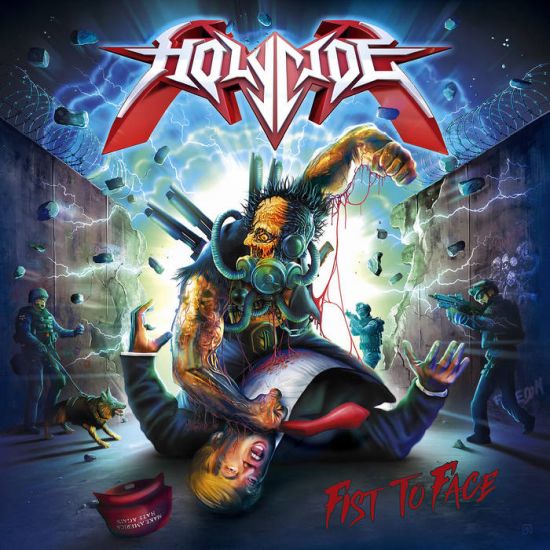 Death metal maniacs are of the opinion that only death is real, but I say only thrash keeps you young. The zombie-esque warrior that attacks D. T. on the cover surely agrees. D.T., who has lost his “Make America Hate Again” cap does probably not share my point of view, but who cares about this irrelevant guy? Germany was heavily involved in the outburst of two World Wars, so I see no reason to worry about D.T.

Fist to Face is the second album of the Spanish unit called Holycide and I must say their configuration of thrash gives me an energy boost. Swift fingers fly over six strings and create riffs over riffs, while the drumming supports the dynamic performance of the guitarists. Lead vocalist Dave Rotten (typical Spanish name) convinces with his unfriendly shouting. Conveniently, he is not only the front man of Holycide, but also the label owner of Xtreem Music and so it comes as no surprise that the album was released by this company. But even if he would not run a label, I’m sure his combo would have signed a record deal. The liveliness, the musical potential and the degree of aggression are simply more than just satisfying.

Holycide do not have written “retro” all over their music, but they also do not wallow in Machine Head-like grooves. The band does not care about the different decades and faces of thrash. It is just here to let steam off and even songs with almost Dadaistic titles ('Trapped by the Crappy Trap') let the hammers circle. Rotten spits out his lyrics in a constantly expressed bad mood and his comrades integrate some pinpoint background shouts. Forget the Mekong Delta shirt Rotten wears on the band pic; his group has rather a more or less hidden affinity for death metal or hardcore. Sometimes they sound like Biohazard gone wild. However, the band knows neither friends nor relatives when they give full speed in songs like 'The Aftermath'. Translate lyrics like “Political assholes have stabbed us in the back” into music and you know the level of velocity.

Frankly speaking, I miss one or two songs that keep sticking in the ear immediately. It’s always easier for old fellows like me to decode an album when having one or other point of orientation. Anyway, the aptly titled Fist to Face has enough elements that make fun, just listen to the highly energetic instrumental part of 'Napalm Sweet Napalm'. I am no big fan of solos in general, but here the dudes from Madrid have forged one of many very nice parts. They do not dish up easy listening thrash in view of some pretty bulky riffs, but they also do not fall victim to an over-ambitious technical approach. This transparent, hefty and powerful album just makes the kind of fun thrash was invented for. And for even more fun it’s time to get rid of D.T., if I am not mistaken.