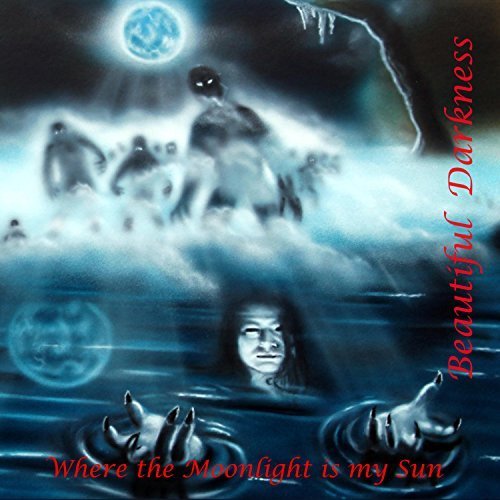 Type: Full-Length
Release Date: March 15th, 2018
Label: Dark Eden
Genre: Doom, Gothic
1 Winds
2 Behind The Gates
3 Now You Are Missing Me
4 Feel Me In The Dark
5 Enjoy With Me This Sadness
6 Back From The Dead (Live)
7 Darkness
8 Sleep For Ever
9 Dreaming
MetalBite on YouTube

Formed in 1993, the Gothic doom metal band Beautiful Darkness has only put out 2 full length records up to now with their latest being Where the Moonlight is my Sun. Handsomely Gothic doom metal with folk, death metal and progressive elements poured into a bottle of already well aged wine. If you need some tracks to play as you stare towards the twilight ocean reminiscing then this is just the beverage for you.

Where the Moonlight is my Sun is Beautiful Darkness' first record since the band's underground acclaimed 1999's Mindless You Sleep. Just like the cover artwork the music here is primarily mellow (apart from a few tracks) and has a dreamlike atmosphere accompanied with heartache. It’s not overly depressing but you can identify the melancholic contrast in tones occurring on each entry. 'Winds' is grounded in a sort of Gothic progressive rock instrumentation mixed light/clean vocals.

When proceeding downwards to 'Behind the Gates', 'Now You are Missing Me' and 'Enjoy with Me This Sadness', you will find the tempo and flow of the songs become less heavy and slower, more melancholic and structurally improved. I say that because the opener 'Winds' sounded a bit unsure of the direction it wanted to pursue, the vocals were saying one thing while the instrumentation was implying another, it seemed like a strange tug of war between prog rock and Gothic doom. No real harm done there as it still turned out to be one of the favorites, but it did appear confusing on first listen.

Thus said, the songs following 'Winds' are decent enough for repeated listens however the real fun (for me) begins with 'Back From the Dead', a live recording of some sort that caught me off guard, and being the old school death/doom fanatic I am, I spent considerably more time on the latter portion of Where the Darkness is My Sun after discovering 'Darkness' and 'Sleep for Ever' also sound like traditional death/doom goodness. All three songs are fantastic, but 'Sleep For Ever' in particular reminds me much of Astaroth's (USA) 1992 and 1993 demos "Drown in Blood" and "Lost State of Dreams". This complete flashback to the early days of the genre was a thrill to hear.

Coming to a close with 'Dreaming’, the album diverts to its more current era and puts on their best performance among the songs featuring their modern and mature style. The music on Where the Moonlight is My Sun has its peaking moments on 'Winds' and 'Dreaming' with regards to their Gothic prog metal sound. While the traditional death/doom highlights are on 'Darkness' and 'Sleep for Ever'. Overall the album is well coordinated and sounds of a true team effort result of the humble tone on most songs. Ralf Vent, Miodrag Stefanovic, Christopher Laschetmade and Ingo Lögers made best of their return in dedicating the album to their fallen comrade Uwe Heepen.

You really would not believe it’s a 45-minute album, given a few minutes it can absorb you for hours. I think there is a remaster of Dark Eden (their first demo) planned for some time in the future, hence if you enjoyed what you heard on this album it would be in your best interest to keep watch for its release. I would really like if the band continued onward with either their old school death/doom metal ways, or even their current approach, either way, you could think of yourself a winner if managing to acquire any of their work on physical media. Where the Moonlight is My Sun is an immutable album, one that plays to the tune of past and present brill.