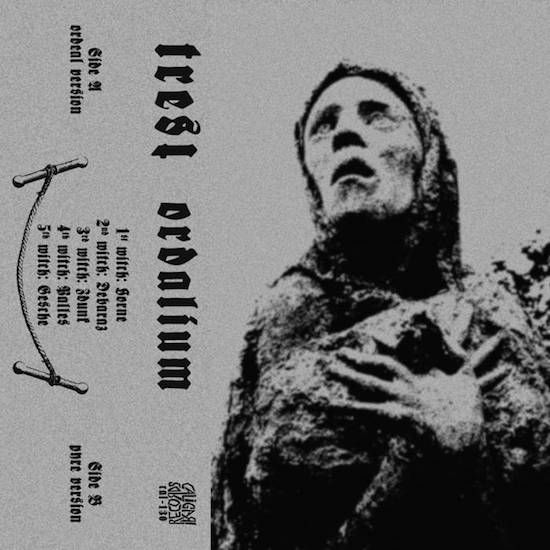 Those who were cast before the unbearable pyre, imprisoned and beheaded due to accusations of black magick and the guilt of arsenic poisoning, are given the spotlight on Trest's debut full length album, Ordalium. At a time when the lack of scientific knowledge was exploited and foolish indoctrinations overwhelmed the judgement of many, the truly wicked walked fearless, whilst the innocent were condemned and punished by ignorant hands and judgmental eyes. German band Trest of whose members are unknown bring to us the listeners the ordeals manufactured by circumstances leading to the execution of these souls.

For me Ordalium is the most overlooked black metal release of 2019 for its thematic scope. Stories range from the last executions on-behalf of the claims of witchcraft in Scotland, France, Poland and Denmark. To the tale of a murderous woman by the name of whom showed care for only vanity and her perception in the eyes of onlookers. The five events are split in two representations, one being more approachable/common production-wise (Ordeal Version); and the other carrying a raw vibration, animated and intensified for the seasoned listener, (Pyre Version). Take nothing away from the music Trest makes, nor be distracted by its net run-time, Ordalium is a full-length black metal record delineating the misery brought upon 3 alleged witches and 2 vile souls.

We look at the way Trest musically summarizes the story of Janet Horne, who was accused by neighbors of transforming her daughter (birthed with a deformation in the feet and hands who later passed on the defect to her son) to a pony. The woman and daughter were sentenced to death at the stake. Horne's daughter managed to escape but Janet succumbed to the flames she embraced with a smile. A sense of confusion, foreboding doom and melancholia sprints towards the listener from the beginning by means of second wave black metal drumming and tempo manipulating riffs painting landscapes of misfortune and despair. The baton is rallied to the story of '2nd Witch - Debaraz' (Father Louis Debaraz) whom at the time had been accused of conducting a black mass and being part of a pact with the devil after being ratted out by an associate. Slower in pace compared to its predecessor yet still effectively conjuring a feeling of premonition surrounding the events.

'3rd Witch - Zdunk' (Barbara Zdunk), accused of arson due to her alleged likeness of the practice, was reportedly suffocated then burned even though there had been no substantial evidence pointing towards her involvement in the fires. Another accusation instigated by an associate, this time of '4th Witch - Palles' (Anne Palles) of whom as a result of torture, confessed to allegations ranging from agricultural sabotage to murder. Trest put their Scandinavian sorcery to work on these tracks that never appear lacking, always worthy of a repeated listen.

The '5th Witch - Gesche' (Gesche Gottfried), labeled a serial killer, unlike the others whom had been seemingly falsely accused, the term 'witch' in this age most associated with vile acts is the definition of what this woman had become. What an evil set of events surrounding her; 16 murdered.

Ordalium is better experienced on the Pyre Version due to the contents if the record being raw and fitting for the unforgiving tales; however, if your aim is to extract enjoyment out of the music that still retains some organicism, then the Ordeal Version is tailored for your tastes. After listening to both thoroughly, its easily noticeable the difference in experience each offers. Ordeal Version has a sound of higher definition allowing the different tones to take greater effect whether portraying feelings of melancholy, agony or anger. '1st Witch - Horne' is able to project such sentiments through its rhythmic melodicism that holds up onward to '2nd Witch - Debaraz' and beyond. As events progress to '3rd Witch - Zdunk' you get the feeling of witnessing the sentencing of these individuals, then sense of absorption creeps up on you hence you barely even realize when the record is through. The pleading and cries by the convicted and victimized ring in your ears through Trest's solid musicianship once some understanding of what took place is grasped.

The music itself is nothing too fancy, only the elementary facets need be here. Through the primitive sounds of early second wave black metal and structures combined with a sample taken from William S. Burroughs' work to a scene from an Inquisition film, Trest make the 25-minute portrait one to remember. I can't help but draw some similarities to Ellorsith when analyzing the instrumental customs. Trest achieves a momentum pacing and fluctuation similar to those detected on Ellorsith's 1959 and Orbhais EPs. I won't be surprised if a split between the two bands materializes. A record this grand needs to be on vinyl albeit sustainability/longevity is achieved, but more-so, as to treat Ordalium with the respect it deserves.