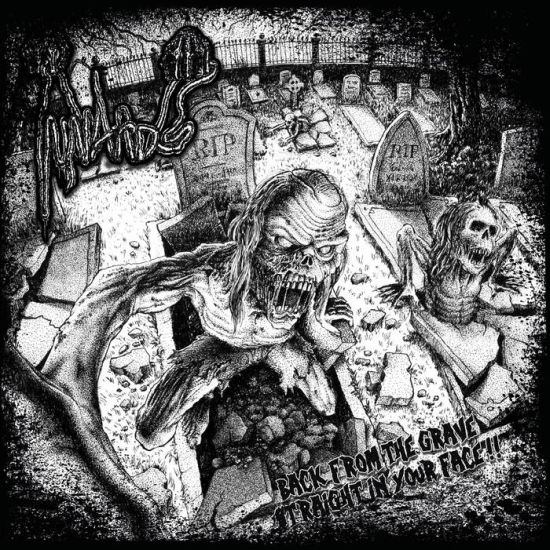 Is exactly what the title indicates, unbarred no punches pulled death metal that'd drag your slouching ass away from your cell phone into a world of limitless hurt. Coming from Portugal that just loves handing out a good old time whopping in thrash and death metal, newly formed Innards shoot candidly to disembowel you in their gutting session of torture on their debut EP, Back From the Grave, Straight in Your Face. What's at the front step is 3 bloody shovels with which Innards uses to untangle your interior.

Starting off the shred and tear session is 'Night of the Anthropophagous' immediately startling the listener with a haunting sample from the renowned Evil Dead; and what follows is the all too familiar riffing associated with this genre backed by crazy guitar licks and vocals crawling about the corners of this release. The vocal mix of growls and snarls create at the very least a foreboding presence, not too shabbily done but is convincing enough for an EP and to justify the epic sample kicking off 'Night of the Anthropophagous'.

As if the opening of ugly riffs and killer voices were not enough, strap in for a combination of thrashing drums and more riffraff on 'Enlightenment through Hate' that builds upon the molested groundwork already offered. Seems as with movement the gestures appear less gentleman-like and more barbaric on Back From the Grave, Straight in Your Face judging by the development of the 2 prior tracks that believe it or not take a seat in admiration of the final burst of momentum on simply titled 'The Fog'. This has a lot going for the band and even shows the listener what may be the appealing factor of Innards while doing what many have already done. Smooth groves and transitions between solos and diverse tempos with vocals clashing against each other to evoke a sinister though simultaneously harsh air, adds a spectacle of sorts when comparing the entries.

Having the hm2 underneath instead of overlooking and weighing upon the material helps to highlight Innards' songwriting qualities that once you've listened to enough, you will most likely stick around for another session. Actually, showing an effort to standout rather than being just another face in the crowd is one characteristic the band can be proud. Thus, it be said their writing style and more so the vocal antics of both black and death metal offer a serviceable angle with which Innards can utilize to progress their sound and identity. For a beginning midnight stroll, Back From the Grave, Straight in Your Face maneuvers the accursed terrain as an aged and aware inhabitant would.