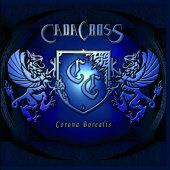 This album is one that has a very accessible flavour and lightened up by many keyboards and similar instruments. It moves along at a brisk pace that is similar to Children Of Bodom, for example. Throughout the length of the release, there is a great deal of excitement shown by the band, but the music is fairly mundane sounding to some extent, only catching your interest from time to time.

There isn’t anything particularly wrong with the musical performances, but they just don’t stick out in any manner whatsoever. Like Children Of Bodom, the music here is adequate and reasonably well structured, but not particularly interesting on the whole. It leads to a digestible, but forgettable listen overall. Similarly, the vocals are of the rough, high-pitched style that is similar to Children Of Bodom. They fit the music nicely, but aren’t anything noteworthy either. The best element of this album is probably the classical feel that it has, which does give it a slightly original feel, though it’s still quit derivate overall. The melodies are audible, but not really poignant either. This sense of melody is demonstrated on the early track 'Among The Stars.

Again, there’s nothing terrible with this release, but also nothing that makes a big impression either. "Corona Borealis" is a slightly below average album overall.