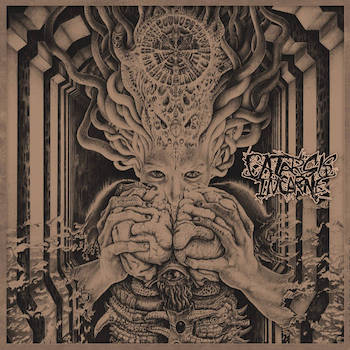 Catarsis Incarne’s most recent release: Abiogénesis Libro III, does not drift away from their trademark sound. Industrial riffing with lots of rhythmic syncopes, use of downtuned 7 string guitars and 5 string basses for a rich low end and mechanical drumming focusing primarily on blast beats. The issue with this band is how monotone the songs are, how much they abuse their own formula. The result is alright, but the main musical themes aren’t outstanding or memorable at all. I mean; its music is obscure and heavy and fast, but it's just the same broken metric over and over again.

Esteban Monestel’s vocals aren’t particularly low or guttural but they get the job done in the end. His vocalization in spanish stretches the syllables and takes the growls into the spotlight. He’s the main songwriter of the band and the bassist too; while his bass lines aren’t spectacularly technical, I must recognize that those odd timings show composition skills and the bass tone is simply delicious, crunchy and fat. He uses a pick but the tone isn’t bright and clanky because its equalization is balanced, it's present throughout the whole album in the mix and he uses a slight distortion to spice things up a bit. He recorded everything by himself, his abilities as a sound engineer are also remarkable.

Guitars mostly follow the bass lines, there are some solos and quiet arpeggio parts but generally the riffs are just the same syncopated ideas from the bass. The guitar tone is sharp and cold, kind of black-metalish and modern. The drumming has a tribal feel on the breaks but the mechanical and industrial edge of the squared blast beats predominates. The use of the cymbals is scarce and the most different variation is the use of the traditional “tambito” rhythm; an old dance beat from the northern pacific region of Costa Rica that is actually festive and happy... I don’t get why they experimented with it in the first place.

After a tough period of my life (something that you probably don't care about), I'm finally back reviewing albums! And what a better way of coming back than reviewing some Latin American metal? Recently, I had the opportunity to listen to Catarsis Incarne. I'm not very into death metal, but it's always a pleasure to check out new and unknown stuff for me. My thoughts? Well, truth be told, they aren't very positive.

To start with, the production and the sound are bestial. The band, as a whole, sounds powerful and brutal; you really feel a wall of sound while listening to it. This is a prime production and that's a strong point in this release. Also, the band members are really competent at executing their instruments; the voice is monstrous, the guitar players (including the bass player) are really talented, as does the drum player. Regarding these aspects, there are no flaws. However, when it comes to music, the real problem with this release appears.

The music is extremely inconsistent. Sadly, only 3 out of 10 songs are worth listening to and to be saved in your death metal playlist, but I wouldn't recommend a death metal fan to buy the entire CD. Why? Because tracks from 3 to 5 have good ideas; they have powerful and interesting riffs, but they are suddenly interrupted by other sections that quit that aggressiveness and power that the song was constructing. It's kind of difficult to explain, but take, for example, the title track; there are powerful riffs, but the introductory riff is introduced (which is more mid-paced in comparison) in the middle of the song, and it eliminates all the power of the rest of the song. The sad story is that this "coitus interruptus" element is repeated during the rest of tracks of the album, and this may feel anticlimactic and frustrating for someone who seeks a monstrous and crushing death metal album. Maybe the band's intention was to be kind of progressive or experimental, but they really should work on this aspect so their music feels more consistent and strong rather than weak, frustrating and kind of boring.

Unfortunately, I can't give a very high score to this release. Listen to the first two tracks of the album and 'Encarnación del Prejuicio'; they are excellent death metal tracks and may be added to your playlist, but I think you will miss nothing really outstanding or special if you ignore the rest of the album.