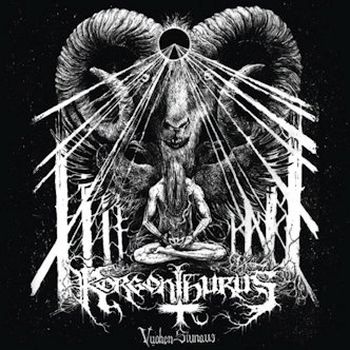 Korgonthurus originate from Finland and they see definitely no reason to hide this fact. Consequently, they play black metal. But is it really country-specific black metal? Maybe not, because the songs have a strong affinity for melancholic, desperate or crestfallen sections. It is out of question that the band also knows the meaning of high-speed eruptions, but they are not the dominating element here. The pretty strong title track, always the first candidate that comes to my mind when looking for a representative song of an album, starts with the power of an iced whip which is swung by a berserk, but it houses less aggressive sections as well. Korgonthurus connect different aspects of the subgenre and, moreover, they feel free to add nuances of another genre. From time to time, the vocalist contributes some death metal growls which seem to come directly out of the mausoleum. Nevertheless, his ardent screaming prevails.

Despite the pretty opulent average playtime (seven songs in almost 49 minutes), the tracks do not suffer from (over-)complexity. The musicians are fans of their own leads, lines and riffs with the effect that a tinge of repetitiveness cannot be denied. Every now and then, the band is able to create a strong degree of atmospheric density, but it is also true that some parts do nothing but offering ordinary guitars that fail to captivate the audience. Blatantly obvious influences like those of Burzum during the closer do not automatically lead to new milestones. After having learnt how to master an instrument, how to play together with other dudes, how to read music and how to compose a song, one thing is still missing – the creative inspiration. Vuohen Siunaus does not need to bow its head due to a number of severe mistakes, but it cannot expect thunderous applause as well. Let me come back to the closer, a song with a length of more than 14 minutes, but a substance for, well, let’s say seven or eight minutes. Not a difficult task to realize the difference, right? Its overlong ending, I guess it makes no sense to beat around the bush, is just boring. Perhaps this ending wants to embody the band’s understanding of endless pain (and we should never forget that endless pain means nothing else than being locked up with Mille P. in a stinking cell), but it remains on a mediocre – or should I say uninspired? - level.

The production is okay. The guitars convey both icy coldness and profound heaviness. In spite of their power, the vocals do not fall by the wayside. The drums and even the bass are not marginalized as well. This is still an underground production, no doubt at all, but it shows that the term underground is no synonym for amateurish. Nevertheless, it goes without saying that the mix cannot make up the song-writing deficiencies. This means that Vuohen Siunaus has to take its seat in the second or third row of the Finnish black metal theatre. Too many sections are not thought through and so the bloodcurdling elements cannot turn the tide for the better. The album is no flop, but I fear that it is fighting a losing battle in view of the legions of (more) competent competitors.