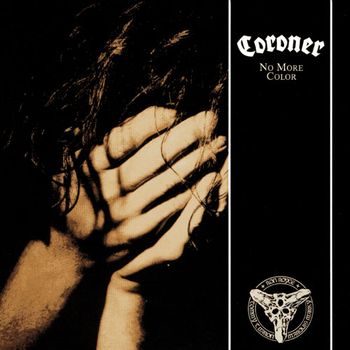 Coroner are the prime example that good music is not enough to be really successful. They never had an aura like Celtic Frost, they never hailed the doctrines of the underground like some of their further label colleagues, for example early Kreator or Deathrow. Adding insult to injury, they also lacked an impressive image, and this was surely a reason why I never became a Coroner maniac, even though I admit that it should only be the music that counts. But here comes the next "problem": I never appreciated their form of thrash in the same way I loved the more rumbling approach of other hordes of the eighties. The style of the Swiss trio was a little bit too technical for my rather primitive music taste. Moreover, I must confess that I liked both the music and the clichés of the metal scene, but Coroner avoided a lot of stereotypes. That's actually a good thing, but my ignorant mind did not realize this actually laudable act of individuality. However, when I listen to an album like No More Color today, I cannot identify an extra portion technicality. I must have been totally confused during my adolescence - too many pretty girls I did not kiss...

In 2018, I am listening to pure thrash metal. Of course, there are some bulky riffs, for example during the verses of the opener or in "D.O.A.", but the listener is not confronted with an overwhelmingly big number of technical gimmicks. To prevent any doubts, let's say it clearly: you will not find arrogant demonstrations of musical skills for the sake of itself. The trio concentrates on the songs - and the results are amazing. "Mistress of Deception" combines crystal clear riffs with pretty discreet oriental tones, tracks like "Why it Hurts" are also mainly shaped by the (surprisingly straight) riffs. But Coroner also intersperse interesting breaks that enrich the respective song without hurting its flow ("Tunnel of Pain", for example). The song-writing mirrors the maturity that the band had achieved in 1989 and it marks the main advantage of the album, because the production leaves room for optimization. The guitars sideline the vocals. Therefore, the voice remains pretty vapid and fails to put its stamp on the compositions. This minor flaw aside, the album is properly recorded. It does not lack strength or vitality.

Coroner try to find the right balance between individual tracks and a homogeneous overall impression and they are pretty successful in doing so. The material boasts with constancy. In addition, it does not suffer from meaningless or boring sections. Even rather solid but not outstanding songs like "No Need to Be Human" are based on a more than sufficient idea. In alignment with the missing image of the band, the songs are presented in a bone-dry manner and this could be the reason why they lack this touch of extravagance that ennobled some compositions of their compatriots called Celtic Frost. But Tom Warrior's cult club is probably not the right benchmark, although Coroner's first steps were influenced by the role models from Switzerland. It makes more sense to recommend this album to these guys that like to listen to works such as Deathrow's "Deception Ignored" - with the difference that Coroner have done a better job. Nevertheless, this album is comparable in terms of style with No More Color, which shines with a simple yet impressive artwork as well. In hindsight, it remains a riddle why the Swiss dudes did not get more famous. The somewhat apocalyptic closer with its flickering synthesizers, the great guitar work and the spoken lyrics shows their potential for the last time while offering a symbiosis of outro and regular song. Indeed, with regard to this competent line-up, I guess it was only the eye-catching image that was missing.