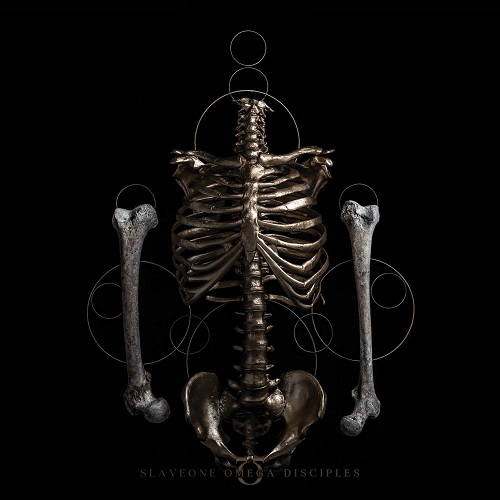 In the cramped space of so many wannabe bands only few could come close to mimicking a single legendary name or combining three of them without leaving traces of sloppiness. France's Slave One are within that very microscopic bunch that can class themselves as having both inspirations plus an approach of their own.

From a distance Omega Disciples (the band's third full length record) is death metal; but from a closer angle, their fixed pose appears to lean unorthodoxly in a position cheered for years. Sinister, Immolation and Nile are not names I use lightly, what they are to death metal is what water is to life, but to hear a band take note of the masters and so vividly illustrate an outcome unifying DNA molecules of their sound as a collective is call for attention. Apart from that, though I rarely mention it, death metal for many bands is just a collection of replicated techniques devoid of direction or purpose, I can't count the number of times it felt like I had been listening to routine installments of the genre. At some point you go 'wait a minute', why don't I just listen to…………?

Omega Disciples offers something both identical and adverse to the generic layout. Imagine Sinister, but a tad bit more rhythmic and slower, Nile, but far less technical and more directly amended by a groovier Immolation, that’s the final result obtained on Omega Disciples; a just over 30-minute sizzling death metal dramatization of bands mentioned. Where others only arrive as a vacant shell of the aforementioned, Slave One's meaty internals sit in the nourishing juices of those now legendary. It's somewhat of a battle to not call this preservationist given the elementary assets of said bands’ obvious inclusion, yet I can't, due to the settled dust of Sinister and such being pardoned by a progressive metal footing; a thing of 'Carbon Mantra', the Morbid Angel and Suffocation noise of 'Lightness Perspectives' and 'Suffocating the Stars'.

It would not be unfair to state the name of Teleport also, whose latest album, "The Expansion", seems to have had an impact during the development of Omega Disciples. ‘Dissident Flesh’ opening segments sound far too influenced by ‘Aphotic Flames of Dissolution’ whose likeness recurs on ‘Shapers of the Inconsistent Horizon’.

But Slave One's rebellion against their influences is most loudly stated on 'Carbon Mantra', a song that would easily be my favorite had 'Suffocating the Stars' not been an entry on the album; this is the shadow of the band expanding its intergalactic reach to consume the listener's memory. Guitarists Nicholas and Benoît have a deceptive grasp on the listener, along with drummer Sebastian build tracks in such a way, the door is left wide open for all sorts of catchy semi-technical patterns that could have easily evolved into full-blown sessions of self-touching. Instead, such is sacrificed for rhythmic velocity giving traceable imprints of Slave One&'s projected direction. And as I had estimated whilst listening to Omega Disciples, climax of the music had made landfall when and where necessary.

Because the music is so unified despite the numerous inclinations/influences used, Slave One's circumspect layout and Shaman-esque obedience, proved to be the linchpin of Omega Disciples' successfully reached destination.