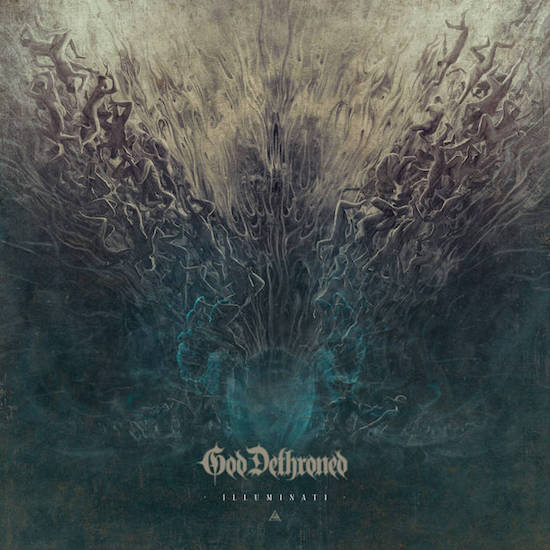 Oh, what a start of the year, with God Dethroned announcing their new album with two singles, "Illuminati" and "Spirit of Beelzebub", releasing videos for both as well. It feels so good to get back in touch with reality after festive season (especially December with so few releases) to see the legends of Benelux death metal scene standing strong, but also providing album that is so much better than The World Ablaze that I immediately felt I had to listen to it as soon as I heard the title track. And obviously share my thoughts on it.

I think that what grabbed me first was very good solos. And I guess you already know that good solos are the best way to get me interested. And boy, there are quite a few good ones here. The rest of the line-up stayed the same since their previous album, so also it's a sign that maybe this line-up will last for a while. And if their creativity remains at the same level, this band might be again on top of my favourite melodic death metal bands. And it seems it might be in my top 3 God Dethroned albums, together with The Lair of the White Worm and The Toxic Touch, so if you like these two albums as much as I do you should find something interesting for yourself here, too.

I've alreadylistened to the title track so many times, that it's become one of my favorites pretty quickly. Other tracks that I can recommend are the second promoting singe "Spirit of Beelzebub" and "Book of Lies". Both are quite melodic tracks, if you want to hear some echoes of the older, more aggressive side of God Dethroned I would definitely recommend "Satan Spawn". It's worth mentioning the fantastic drum work on this one, Michiel's blast beats and bass drums are just brilliant match for this material. And they're really good, especially in this track. "Blood Moon Eclipse" gives some taste of his skills, too.

Interesting addition is the clean vocals here, which just add to the overall atmosphere, enhanced by keyboards, present in every track here, both quite refreshing elements to God Dethroned's style. Clean vocals were used on previous albums, but don't think I've heard their album with keyboards in every single track. And choruses like in the title track or the opening/closing melody line of "Gabriel" just get stuck in my head and don't want to leave. And the "Eye of Horus" with its interesting different style, composed by ex-guitarist Mike Fergusson, brings some occult accent to the material.

The conclusion is that God Dethroned is definitely in good shape, providing solid material with all the elements I like - good heavy sounding guitars, blast beats, solos, keyboards, growls/shrieks and solid bass. If you want to give it a go, try "Blood Moon Eclipse" as soon as it's out. This track has almost everything that is good on this album. What really impressed me is also the band's ability to make it quite recognizable God Dethroned style, but with a fresh perspective on balance between instruments and vocals. A must-have for fans of melodic death metal this year.