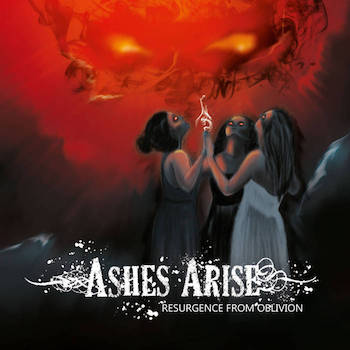 Released February of 2018 is the debut album of international melodic death metal/metalcore band Ashes Arise, Resurgence from Oblivion. Suitable title considering the state of melodic death metal for more than 2 decades it seems, milked to mediocrity by big labels forcing seekers of the music to dig for even barely listenable versions of its form, therefore depending on lesser known bands to deliver the goods. Resurgence from Oblivion is far from the best but also far from the worst, it’s a record stuck in that middle passage of promising and bearable. It’s a long album, hence the issue glares brighter with the progression of time and so do the strengths of the band.

In addressing the issue/s first, the metalcore growls or whatever those were, need to take a leave entirely from the band’s music, they're weak, come across as forceful and instead of positively impacting the music they do considerable damage. In fact, I think they should either get a better harsh vocalist to handle the growls or completely remove them from the band's sound. Even at metalcore standards they're very tame and did not need to be on the album. I think the instrumentation handles the metalcore and melodic aspect of their music competently enough to lose the weak growls/grunts, in fact I'd rather not hear metalcore vocals at all on a melodic death metal album, just let the instrumentation take care of it.

The strengths of Ashes Arise' music on Resurgence from Oblivion exists within the semi-operatic/clean vocals and instrumentation. I could listen to the album with just those two elements; Emily does a fairly decent job of providing clean vocals to the music, her voice is consistent, has distinguishable pitch and coordinated flow. On some songs her vocals steal the spotlight; 'The Countess', 'Fate', 'Sleepwalker', 'Awakening' and 'Summoner'- (best track on the album) shows her ability to steer the effort in a manageable direction as leading vocalist of the band. With time I hope her ability improves given the potential she has to take the band to a higher level. However, the true highlight of the record would have to be Amy with her guitaring, they offer a cushion like feeling to the music through varying styles and tempos. From mid paced groove on 'Obsidian Evil' to the thrashing fury of 'Unleashed' there's no denying she can shred.

The keyboards by both Amy and Stéphanie (who also handles bass) are not dominant in the mix but are audible enough to provide an atmospheric effect to the songs such as on 'Sleepwalker' and 'Theory Divine' which have the strongest songwriting and most effective keyboard compositions. I understand the drums were programmed, however they don't have that irritating clicky reverb associated with computerized ones. They're also given a levelled mix with the rest of the music plus don't appear to be anything manually ir-replicable. Despite the flaw, Resurgence from Oblivion is a good record; however, I think they have within them the ability to produce a better sophomore.