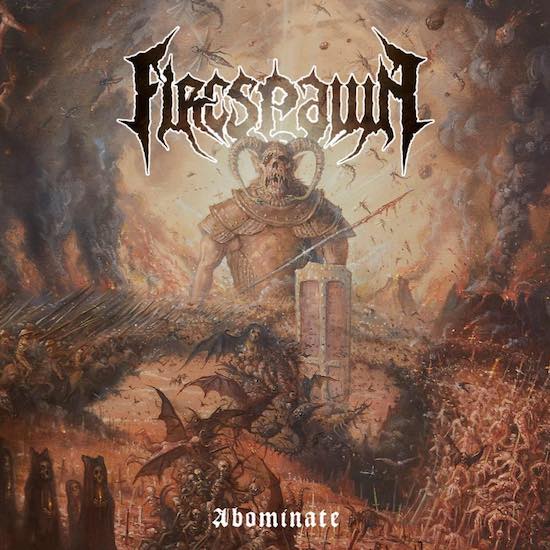 I didn't have any expectations for this record, I just knew it has some killer art that reminds me of Dark Souls. Most things do and I can always fuck with that. It's got the Swedish sound but it's more thrashy than melodic, it's a very rockin' death metal record with great rhythms. There's a strong old school element not too far from the path of Entombed but there's also the presence of newer trendier ideas. I say give it a go because I've listened to it a few times and it's stayed catchy over the course. It's a modern album featuring some veteran musicians from bands such as Entombed, Morbid, Unleashed, Nihil, Dark Funeral and more. Very much a supergroup.

It took some time to decide what the highlight was for me, at first I thought about the energetic lead guitars and the melody they bring but the more I listened to the riffs the more I realized that it was actually the solid contributions of the rhythm guitar that brought it all together. On a purely guitar level I can hear a lot of influence from progressive death metal which offers a lot of variety - it helps a lot that both guitarists work so well together. It heightens the whole sound when you have a decent rhythm player and brings to this specific album a lot of moshability and even danceability. I can definitely hear the classic heavy metal sound on the solos which come with the implication of a big swinging dick.

The vocals are fine, again very much old school inspired with a thrash level of clarity to the lyric delivery. The execution is good, but the actual lyrics are hit and miss, sometimes sounding a bit goofy. Parts of this album sound like an attempt to use the best and heaviest bits of Gojira and discard all the wank, or at least disguise the djent aspect and edit out the filler. Imagine a Gojira record where it's entirely Joe Duplantier's most guttural vocals and the signature pick scrape techniques. It might sound like I'm taking the piss, but I think it works well, it's heavier and faster than Gojira but also far less djenty than 2018's Slugdge release, another fair comparison to make. "Abominate" is a good in-between and mix of things and eras when considered in its entirety.

As I said, the artwork is solid, and I should have known that it is a piece by Paolo Girardi. He's on a lot of covers and has a distinct style that oozes epic and vision. This kind of art is just too perfect for metal as a genre, it does so much to service the music and the marketing. Overall this is one of the records where you just have to try it on for yourself as it is of a certain aesthetic and there's a lot to choose from right now. The presence of experienced musicians is clear in the playing of the instruments so it shouldn't disappoint on that front. It mostly comes down to your own ability to appreciate the decision making behind the music. It's certainly palatable, it will please most metalheads.