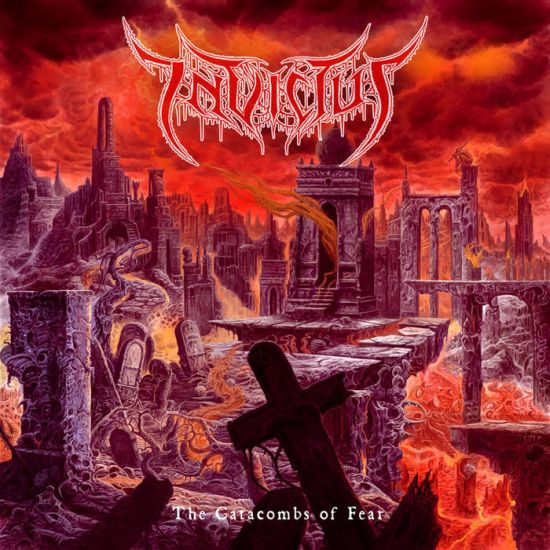 It's a preconception but I'm going to come out and say it right now: whatever Western thing the Japanese do, they always do it with gusto. Whether it's cars, electronics or death metal, they go the extra mile. No better way to prove this biased statement as Invictus and their full length The Catacombs of Fear.

The sound of this band is firmly rooted in old school death/grind from the late 80's and first half of the 90's and the band plows through a collection of varied tracks in which these influences can be heard to the fullest. There are nods aplenty to the earliest works of Carcass, Pestilence, Death and Massacre, but there's also a big helping of thrash influenced riffing and lead work that firmly acknowledges acts like early Kreator, Macabre or Protector. The layered growl/scream vocal style brings to mind the work of Deicide and gives the music that demented edge needed in this aggressive style of death metal. These men know their way around their instruments, and they know how to construct an interesting song. Tempo changes are abundant, and the songs are full of breaks without becoming annoying, while the riffing is technical without becoming sterile or boring. It's always in function of the music and it never deteriorates into an instrumental wankfest. The velocity is kept high for the most part but Invictus knows when to step on the break and even built in some atmospherics in places. A good example of this is in the middle of the title track. Here the band builds in a short spherical, somewhat jazzy part in between the raging death/thrash, a move that's reminiscent of what Pestilence did on their "Testimony of the Ancients" album. Even if small slip-ups can be heard here and there, I consider this album to be quite an impressive effort, in music as well as in execution. There's one thing I have to mention though, and that is the fact that the production is a bit on the peculiar side. I can't put my finger on it but it took me some spins to get used to its overall sound.

This is a really good old school death/thrash/grind album that gets better every time I play it. The music is well executed and there's quite a lot to be discovered here. It's one of those releases that stays interesting even after repeated spins. Add to that the impressive artwork and we have a great death metal package that I can recommend to all who like it old school.