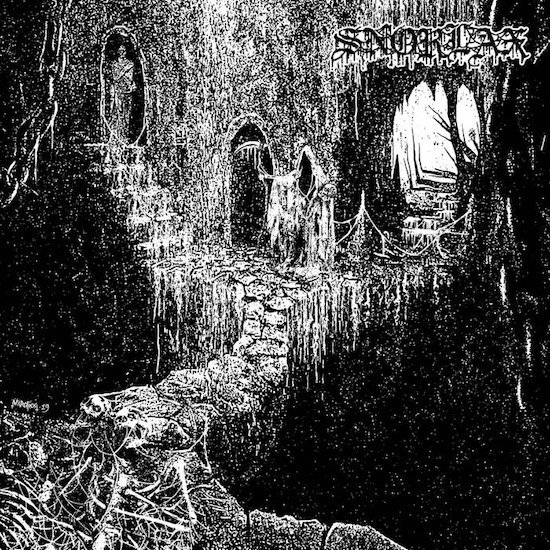 Snorlax, besides the bubbly pokemon, is a not so bubbly blackened death solo project created by Brendan Auld, an Australian metal machine from my neck of the shit-woods Brisbane. He’s involved in numerous projects such as the death/hardcore band Descent and recording/mixing as Black Blood Audio. Brendan also joined Siberian Hell Sounds and started Consumed in 2018, then started up Necroseptic and did a split as Snorlax in 2019. How do you know when you’re done? There’s a methodical nature to the creative process that ferments over years and almost always starts with a demo, from barebones to the whole damn skeleton, you can see the vision building. This is especially true with his solo project Snorlax which will confront you as harshly as any full band would dare.

This album is difficult to describe – my first instinct is to say this often sounds like the devil taking a shit on a red-hot toilet. It sounds like the wind howling through a shotgun wound. This is true blackened death, not that fancy trendy kind, but the kind that will separate the bull from the shit and the tots from the tit. It starts out with a fairly typical black metal assault, but the death and even sludge-like quirks become clear very quickly. II goes beyond genre and dips into the territory of divine audio nihilism to find the darkest core of every instrument, and I think this is achieved. The guest vocals by Anthony Oliver (Vox for Descent) on the tracks “The Resin Tomb” and “Impending Abysmal Wretchedness” bring a nice accentuation to the album that I always enjoy with dual vocals or additional vocalists on a track. Variety is good, even in death shrieking.

The mixing, done by Brendan Auld himself, is an essential element to the darkness present on the record as his focus seems to be “How can I make this even more intense?” Seriously, I think I got a hernia listening to this album. The thing that I find most astonishing about it is the level of clarity that remains – the “melody” from the guitars isn’t drowned out by a muddy mix; rather, it’s a sharp mix that has a lot in common with lo-fi death doom albums. I’ll be looking forward to getting this one on cassette as it’s the perfect album for that medium. I like to collect tapes with certain artists and so far I’ve got my eye on Necro Frost who did the cover for II as well as for the new Carcinoid album. His style completes the underground aesthetic of these bands.

Perhaps I have a “Mind Ov Maggots” because I find this album quite addictive. I’ve had it repeating while I work away at busy body things – it’s the cordial soundscape for my brain to think freely and imagine – even if I should not be allowed to. There’s really not much else to say, this is a record that doesn’t just end. It slaps you on the arse and turns you over. You will have to taste for yourself because I know there’s a bunch of “I listen to all music” types out there who will turn their nose up at this like a putrid fart. Those of us who can handle alternative and experimental music will find something stimulating here.