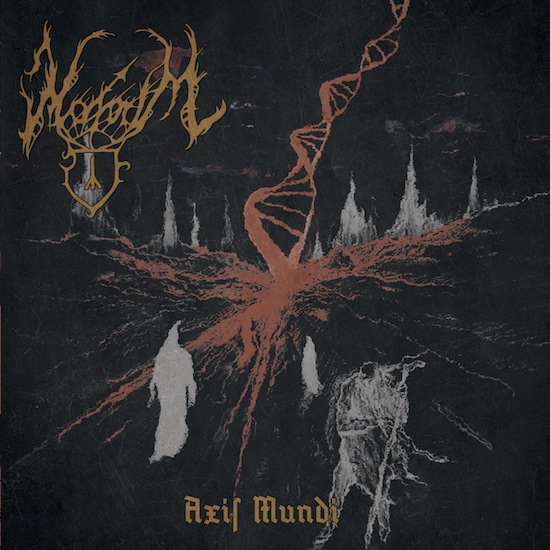 In strikingly similar fashion to Vananidr I’d almost missed out on Mavorim’s 2rd full length record (after having put out an EP, Aasfresser well worth the status of a full album). As if that was not an earful of music, we are later gifted with a full length under the title Axis Mundi that even without its 2 additional cover songs pushes the 1-hour mark that would challenge the attention span of some listeners. If you're the browsing kind then this is not for you, but if you’re one that likes a good old-fashioned endurance trial then Axis Mundi is tailored precisely with such in mind. Not only is the record pushing the clock, but it has the necessary variety and moments of awe to adore and keep your stay an interesting one. It was not that long ago Minenwerfer gave us a record astoundingly beyond words being "Alpenpasse" put out on Purity Through Fire, now fellow label-mate Mavorim has risen to the occasion of challenging affiliates and itself with Axis Mundi. Project engineer P. with the slight aid of Revenant providing additional vocals on ‘Wie ein Strum’ and Baptise doing the same for "Kaiserjägerlied" evinces a musical fortification too great for an average fan to even grasp the immensity of.

Immediately noticeable is P’s music utilizing the flute and keyboards which are assembled thoughtfully and brought forward in the mix that when heard comes as a moment of tranquil acoustic refreshment, an element that was mostly absent on past albums that were more straightforward black metal if I recall correctly, or at least on Silent Leges Inter Arma. To some level it was introduced on the Aasfresser EP along with a weighty sense of melancholy that hits you full throttle on ‘Aus Asche auferstanden’, one of the best pieces of black metal Mavorim has made since its inception. Bringing me to the intuition of the album that could be mostly described as an emotional assault, because the music on Axis Mundi has been approached at an angle greatly multi-layered and mature. Guess you could say it’s a well calculated move to introduce the listener to new ways, especially ones more familiar with the vast majority of Mavorim’s music; to incorporate new features early-on, rather-than stick to one formula for years then receive massive push-back from supporters when different components are installed.

You’ll get acquainted with the melancholy of aforementioned ‘Aus Asche auferstanden’, then without notice Axis Mundi would toss you into the battle with ‘Wo kriegergleiche Kräfte waltenh’ and ‘Wie ein Sturm’ to follow. Situated in between all this is a glowing body of guitar melodicism calling into effect yet more melancholic notes to aid the pagan-esque sung chanting while the latter shows a prominent traditional technique complemented by ambient keyboards. If you have ever been a supporter/listener of Kampfar’s music you’d find some resemblances to "Profan" and "Djevelmakt" existing on Axis Mundi, also a riff structure somewhat similar to Sxuperion’s ‘Irreligious Cosmic Void’ appears on ‘Wo kriegergleiche Kräfte walten’. A favorable degree of tempo shaping and subtle to conspicuous assertions of tuneful ambiance continually reappears on songs down the order such as ‘Der Himmel bricht entzwei’ that again finds ample room to insert chanting pagan-esque vocals. Because the record has many succinct ways to keep the listener engaged, it never comes to a standstill or point of inactivity, thus avoiding the curse of attentive coercion. Sometimes you’d have to force yourself to sit through something this vast but due to the scope of Axis Mundi musical depth it comes as a welcomed joy than an obligation.

What I’ve come to find striking and characteristic of Mavorim’s music since discovery, is the ability to give credible representation of the artwork; on Axis Mundi, they’re both enigmatic/obscure and poignant emanations from the cover depiction that in turn is exalted throughout the record. Can’t miss a note with a production so clear that in turn justifies the plausible covers of ‘Wie ein Sturm’ (featuring. Revenant) and ‘Kaiserjägerlied' (featuring. Baptist).

This is the step Mavorim needed so greatly to transform the music, hence if a new recording should come it would only be right to keep in steady footing of the projected path as to not contradict the progress made on Axis Mundi.