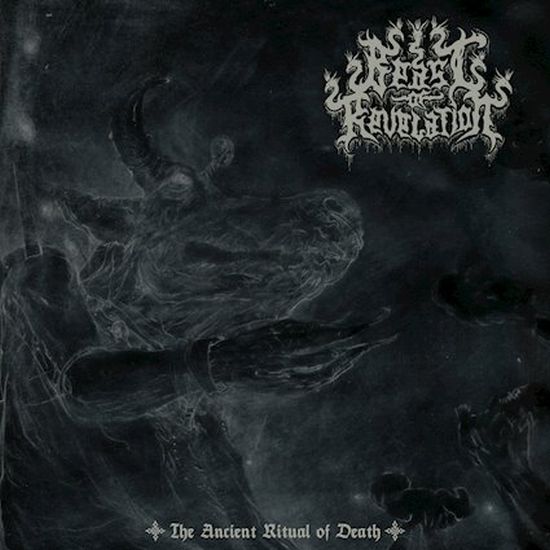 First thing that attracted me to give a try to Beast of Revelation and their new album The Ancient Ritual of Death was the fact that the mighty John McEntee from the quintessential monstrosity of death metal called Incantation was spewing his vocals for this project. I was curious of what i will find and my expectations were high, it could be an underground jewel, an entertaining recording or total crap, as simple as that.

The band hails from The Netherlands and I think because of that fact, it is just a side project that features the vocals of Mr. McEntee. In general, we can find a death/doom approach that takes its time to build in the songs and it seems that never reaches a pinnacle of brutality. For what I can tell, the music of this band depicts some landscapes of anguish and desperation. Talking about desperation, I think it was the first feeling that appeared during the several listens that I gave to this recording. You got to be very patient and wait for the good stuff to pop up in very few moments. I think that by the fourth song called 'The Fallen Ones', I started to find some taste in this bland approach. The self-title track also offers some interesting guitar passages but nothing that blew my mind. You can find a couple of interesting growls and screams here and there as well as catchy riffs but in general it is kind of dull and takes time to develop ideas that seemed unfinished.

Most of the times when you listen to a death/doom band you come to feel oppression provided by the crushing atmosphere and be engulfed by suffocating landscapes but it is not the case here, sorry, I had to say it. Instead, you will find boring and average pieces that lack catchy hooks and only offer loop after loop of the same riffs and drum patterns. I consider that McEntee's collaboration was kind of a commercial strategy no more than that, the band doesn't have what death/doom is all about. Death/doom metal is not just about slowing down to the point of tediousness; it is about creating an atmosphere of decrepit landscapes and Beast of Revelation fails in this attempt. The album is not total crap but is pretty close to it, McEntee's vocals save the day but not quite. It is also interesting to hear him out of his main and side projects, but I think that his voice does not fit into the concept quite smoothly, he sounds forced and out of his more aggressive and cavernous register. There are several times in which this band tries to reference the sound of Hooded Menace like in the song 'The Unholy Roman Empires' for instance. However, it lacks the skillfull musicianship to hit the right notes and sound monolithically destructive.

All in all, Beast of Revelation just barely manages to sound entertaining, I found it useful as background noise that you can listen while you do other things (like work on your computer). Even though I listened the album several times I don't have many recollections of specific songs or riffs or memorable passages. Being the first effort from this band I can give them the benefit of doubt and maybe there will be room for improvement in the future. Nonetheless, I have to say that I did not find The Ancient Ritual of Death interesting or impressive; there is a long way to achieve the punch they need to impress the listener and create the right kind of aura.

Hearing Incantation’s front-man John McEntee would be involved in making Beast of Revelation’s debut record, The Ancient Ritual of Death, was an immediate green-light and welcoming billboard just outside the death/doom residence. Coming from under the Iron Bonehead management was similar to getting a prescription from a certified doctor for an illness; it was compulsory listening. Surprisingly, members of recently formed black metal band Hellehond, also share space in Beast of Revelation, which raised my interest as to how The Ancient Ritual of Death would turn-out if black metal of any sort would be incorporated. Hence; there are minuscule traces of it on the album which is digestible as I don't think it would have been of good measure to make the element dominant. This album served as a warm-up or maybe a glimpse into what incantation could be working on, so there was more than the average expectation for it. What’s important here (for me) is how well the songs were composed and gelled with each other. Not going to say it is tailored precisely to my preference, but The Ancient Ritual of Death as a debut has its glory moments.

Pleased and frustrated is how I would describe my initial response after the first play-through of the record. I could hear the tip-toed approach Beast of Revelation had ensued very early on; The Ancient Ritual of Death would show one hand but play another. Primarily conventional yes; however, making each song an event was poked at ever often but not fully acted upon. ‘Legions’ and ‘The Great Tribulation’ check all the prerequisites for death/doom, making any listener happy, but where evolution and individual song progression are concerned they only toy with the idea, in-turn leaving the listener somewhat satisfied but at the same time a bit underwhelmed. ‘The Cryptic Void’ seemed to be opening-up every now and again to exploit the possibilities of expansion when modifying the tempo and introducing guitar sections that would interrupt the momentum, but never followed-through on its projected promise. However, it was not until ‘The Fallen Ones’ (which I would argue is among some of the better songs on The Ancient Ritual of Death that the writing began to germinate from its stationary habits. Melodicism is used finitely, groovy sections climax with more effect implying a lifted sense of urgency and the guitars go beyond the dragging power-chords to offering a thrilling though melancholic feeling in keeping consistency with its title, ‘The Fallen Ones’. It is here The Ancient Ritual of Death began to lift its head to a gradient whereby it could realize its potential.

How Beast of Revelation went-about communicating their message, provided some mixed-feelings personally where the album’s consistency is concerned. While gradually depositing elements into the songs, thus expanding and improving (only to an extent) the complete texture of the album affected by a lack of commitment blemished the musical side of the record. However; ‘The Fallen Ones’ (for me) is where the offering truly began to shine even after ‘Legions’ and ‘The Great Tribulation’ proved to be decisive introductory content. But those along with ‘The Cryptic Void’ fell short of the bar exceeded by tracks later down the order; ‘The Ancient Ritual of Death’ and ‘We the Lords of Chaos’ for example, tighten the record’s feel and amalgamates the album to resembling something complete. Though a seemingly feasible pitch, to free-up some space for the guitars to work and alternate the musical patterns were enforced, a question of had this been done from the start, how much better would The Ancient Ritual of Death as a debut for the band would have been?

As mentioned before, the black metal is kept at a discrete and distant level in an attempt not to interrupt or undermine the death/doom aspect, but only to give support. Thus, its use through vocal snarls and tremolo picking sprinkled on ‘We, The Lords of Chaos', (to my recollection) showed good musical economy despite not being used much. John McEntee’s vocals are outstanding, still after all these years with Incantation, without a sign of depletion or deterioration, he steers the music down a passage fitting The Ancient Ritual of Death’s thematic tenor. Thus, the record as a concept (I assume) stands its ground as being a studious tenant of death/doom metal; but called for more consistency and immersive instrumentation if it would transcend conventionalism.