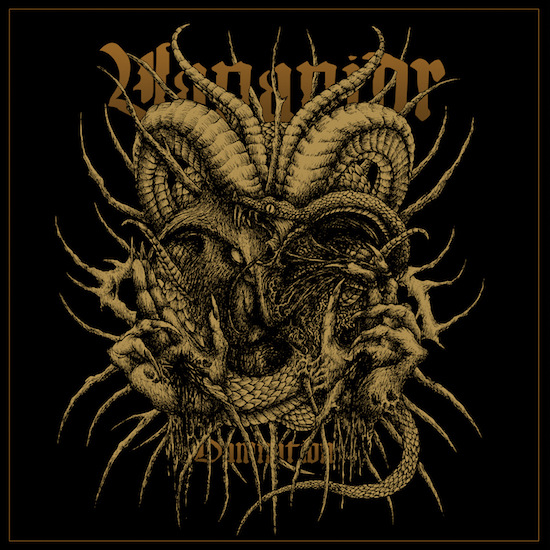 I missed out on reviewing Vananidr’s 2018 self-titled debut and thought ‘fuck it, I’ll do their sophomore Road North released in 2019, not even a full year later, 7 months to be exact, yet I still could not make time to do so. Then out of nowhere comes another record, Damnation due out 24th January 2020, couldn't let this one goes by untouched for I'd be damned. Sweden has had its foot planted in the black void for years now having truly spearheaded the 2nd wave of black metal with both small and big names, now comes a ‘new force, new energy’ under the moniker of Vananidr delivering healthy portions of old school second wave black metal the likes of Marduk, Dissection, Dark Funeral and Lord Belial. I kid you not, I had to check the release dates of their first record given it was so identical to the black metal coming out of Sweden around that 94-97 period. I’d say Vananidr are the sincerest Swedish black metal band going right now; I have heard many try to replicate what had been done during that era of second wave back metal but amounting to nothing memorable. Records were particularly long that time but were damn blissful; nowadays you’d have to dig deep underground to find anything quittable or of the same distinction as those before.

Vananidr’s second album proved that sustaining enjoyment and interest for 1 hour plus was easy in comparison to the failed attempts of countless try-hards. Damnation on the other hand compared to their debut and Road North is shorter, less on the aggressive side, more mature and multilayered but not at the cost of the RIFFS! Yes, one of the main highlights of Vananidr’s prior records particularly the self-titled debut. Addicting-saucy-licks left, right, back, front and frigging center, make no mistake you’ll get the same level of masterclass on Damnation, whether it be in the fiery void of ‘Distilled’ manned by Terrorblaster’s fucking insane drumming (he must be trying out for a new Windswept album) or the moderately paced, eloquence of ‘Tides of Blood’. I’d say Damnation is a toggle between beauty, grace and pugnacity. Split in two it seems with the first 3 tracks tackling the warmonger-like compositions while the latter 4 handle the combat in slower more atmospheric strides, with ‘Reflection’ briefly revisiting the furious surges of bolting and catchy drum and cymbal landscaping-mosaics. It was important to not recreate the debut but at the same time retain some of what made Vananidr and Road North successful entities.

Newest recruit Ljusebring Terrorblaster’s drumming is remarkable and without fault. The blast beats on ‘Distilled’ are insanely good, also his cymbal work is very classy regardless of momentum pacing which by the way, even his slower parts carry the mark of stalwart and scholarly discipline. Rickard Silversjö chipped in with guitars to compliment those of Anders’ and as a combo the executed a fantastic job. You hear it throughout the soaring guitar leads and solos on the very Dark Funeral-esque ‘Damnation’, ‘Hunter’, ‘Wounds of Old’, sometimes atmospheric other times scorching with rage or both. The album’s mastering, mixing and recording was handled by front man Anders Eriksson who did an excellent job, making a significant step up in the production department from decent to an exemplary status. Not to mention his vocals achieve the ideal pitch not too high or low but leveled at mid ranged yells. An all-round exhibition of superb Swedish black metal that’d be a challenge to top by even the icons of the genre.

Vananidr is on a streak of producing high caliber black metal despite spawning the albums in short succession of each other. And with Damnation, the foundation of Vananidr strengthens.