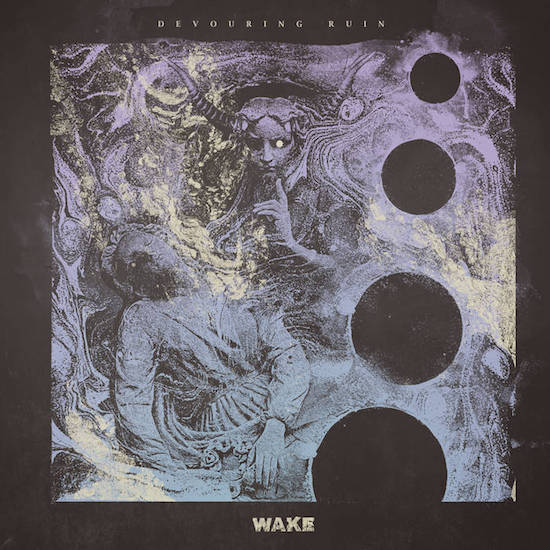 Like the opener 'Dissolve and Release' indicates, Wake with their latest album operates as a conduit of relief, therapy to sedate the suffering. A medicinal if anything sort of album, high concentrates of death metal, erupting from a crust and grind drenched volcanic shell homing a blackened lava that'd coat all with its taint, chasing the light from all corners as time goes by on Devouring Ruin. Uncrowned, yet Wake remains in commitment to their vision since Surrounded by Human Filth and Leeches; maturity is evident, such as is improvement, thus the band climbs to a new level in their journey as another fragment of their image reveals.

Wide mouthed and resonating, delve deep into a chasm of haunting reflections and become one under the shelter of a provoked fear. 'Kana Tevoro (Kania! Kania!)' is what a release sounds like, enraged and energy draining, perhaps the reason you'd feel weary by the time it’s through. Is it the fear of being eaten by an evil spirit or a sorceress? I don't know, I don’t have the lyrics, but fear always finds a way to resurface in our thoughts about whatever. However, 'Kana Tevoro (Kania! Kania!)' does not encourage you to cower before the abhorrent visions, instead take by the horns that which haunts the troubled soul. Death metal would come to the aid, black metal stands close-by, meanwhile the rough and uplifting crust screams triumph through the nightmare of the fed-up victimized.

What exactly is this music, an accumulation of styles if given a thorough listen, not quite easy to pinpoint, hence the incorporated doom metal, sludge, post and black metal sound waves brought into effect on ‘This Abyssal Plain', 'Mouth of Abolition' and 'Torchbearer'. Also, an added depth of heaviness, consistency and connection is applied, contrast to Wake's earlier recordings that were significantly shorter that the current Devouring Ruin, thus the longer tracks have facilitated the band's aspirations to make their music more compact that of a loosely built skeleton of sound. A much-needed step in their catalog to play with more diversity and emotion to give the listener a feeling of being engulfed. 2018's Misery Rites was a step up in song writing, though still displaying the band's custom of 2-3-minute sprinting compositions; now what you'd find is a track the likes of 'Exhumation' progress into other metal territories and tones instead of just stepping over the border rudely.

As mentioned the songs have way more feeling to them compared to past albums, in fact I'd say if listened to without breaks you'd notice a sort of attachment or instrumental romance taking place within songs. Each entry appears connected to the prior due to the cascading musicianship or more specifically the black metal influences woven into the mix. Also, while older albums appeared to be a semi-technical deathcore showcase more than anything, Devouring Ruin is assembled as an excellently amalgamated unit of vacillating harmonics aided by a sonorous vocal exhibition. Hence, with all accounted for on this significantly different record by Wake, one can’t help but notice the movements of Abstracter find a space to work with in contributing to the album's musical texture.

Devouring Ruin is easily Wake's best output as a band active since 2010; 'Mouth of Abolition', 'Torchbearer' and 'The Procession (Death March to Eternity)' are the best songs they have ever written, breaking loose from the almost demo-esque feeling past records exploited. Devouring Ruin should be on many 'best of' year-end lists as either a contender for or THE best of the year. If you were looking for a reason to acquaint yourself with Wake's music then this the album to propel your step into their void of ruination.