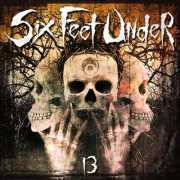 Bring out the Oreos and milk ladies and gentlemen; the cookie monster has the munchies! Unlike the past few Six Feet Under releases, Chris Barnes and company are not interested in performing the slower groovier tracks which some fans may remember (or have completely erased from their memory). Rather then spending the last few years writing new material, Barnes spent most of his time smoking marijuana, drag racing, and recording AC/DC songs – SFU style. Either Barnes smoked himself sick of slow songs or all the marijuana actually created a chemical imbalance in his brain, sending signals to his mouth, telling the band to play fast balls-to-the-wall death metal ala Cannibal Corpse.

13 is a promising release not only for the fans of Six Feet Under, but also for fans of death metal. SFU have picked up the pace dramatically from their past releases, creating an album that is sick not only with its lyrical content, but its precision on the part of guitarist Steve Swanson and bassist Terry Butler. Rather than fusing the sounds of Kyuss and Queens of the Stone Age and down-tuning the result, SFU are now playing up-tempo complex guitar parts and lightning quick tap solos. Drummer Greg Gall mixes up speedy double time and quick tom fills with the traditional slow and simple drumming to which most Six Feet Under fans have become accustomed.

With all the down time between Cannibal Corpse releases, fans of the genre should find 13 to be an exceptionally tasty piece of meat to chew on while waiting for the next big death metal release.