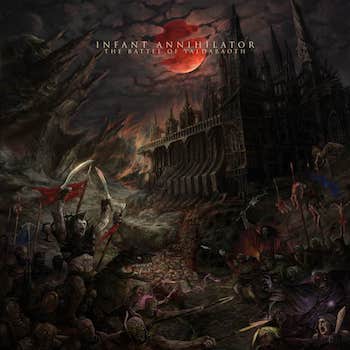 Infant Annihilator - what a band amirite? The media perception and the perception of people (who know this band exists in the first place) is just very random and all over the place. Some people hate this band, some people like this band. Their first two albums have had their fair share of attention, both good and bad, (mainly bad according to some people), but after a few years of some unpredictable and interesting music, we got a new album here!

The Battle of Yaldabaoth released on September 11th, 2019 (which is Aaron Kitcher's Birthday by the way) is something new and fresh with heavier, matured, and improved sound. The single "Three Bastards" provided a peek at the newer and latest sound of the band, and it was pretty good, but the whole album is even better. It's really a huge improvement! Their old stuff isn't bad but this album is more advanced and thought out compared to the previous releases. I honestly wasn't expecting it to be as good as it is, but this is indeed some quality stuff. My birthday is also September 11th, so to have a shared birthday with Aaron Kitcher and on top of that, a new and improved Infant Annihilator album too? What a great gift!

Every area of this album is good. From the songwriting, songs, vocals, instrumentation, etc. nothing disappoints. This album has the same formulas used in older Infant Annihilator albums, but with something else more to accompany it. It's pretty obvious the band has taken some influence from other related bands such as Rings of Saturn and others. More intricate and thought out songwriting, drum patterns, guitar parts, and more expansive vocals. Of course, you still got the trademark Infant Annihilator vocals which is the low guttural bark-burp-type growls, and the scene band-black metal sounding highs. But on this record they're even better. It’s obvious Dickie spent some time arranging and composing the vocals for this record, and he did a good job, that's for sure. The general sound on this album is also just magnificent. The drums don't sound nearly too processed, not everything sounds too buried, this is more of an open atmosphere record, and every second of it is good.

I also like how they incorporated some strange little small parts in some songs too. Tracks like "Plaguebearer" and "Paedophilic Supremacy" do this very well. "Plaguebearer" has some chuggy Meshuggah type stuff in the 1st half of the song, and it's groovy and moves the song along pretty great. "Paedophilic Supremacy" starts off with some fury but then slowly descends into something mellow. I guess you could call this some jazz-type stuff (I guess?) I don't know for sure, but the stuff that track does it pretty cool and unique. These are signs that the band has again, improved with this record. Can't find anything to complain about if I'm being honest. This release is a smooth and cool listen that doesn't have any bad parts.

Great job guys. Another cool album, and something newer too. The album art is unique, the songwriting has more oomph, epic title, everything has increased in quality quite a bit, just every single thing fits in here and works. Definitely one of the best of 2019 so far.

Overall, this album is GOOD. Even if you're one of those people who have nothing but hate for Infant Annihilator, you have to admit that The Battle of Yaldabaoth is something of improvement and better-ness. Take the time to listen to this in full, don't smear this as some "INFANT ANNIHILATOR SUCKS AND SO DOES THEIR NEW ALBUM DEATHCORE SUCKS" bullcrap. If you're one of those people, please just stop. This is a good listen. 2019 has been a great year for metal, and a new album like this coming from a band like Infant Annihilator, you should at least give this a little something of approval.