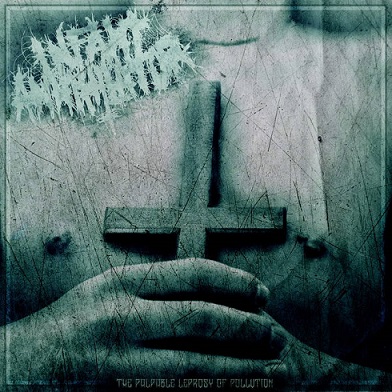 Infant Annihilator, the infamous deathcore band that's either loved or hated by everyone. I absolutely love their music. I wouldn't consider myself a DIEHARD FANBOY of the band, but I sure as hell am a functioning fan and I do love their stuff a lot. This is some of the best deathcore out there, straight up. As the bothersome name suggests, the music surely does suit the band's name. This is absolute insanity and you'll definitely remember this album once you hear it.

Obviously we may as well start out with the main aspect - the drums. Don't even know where to begin honestly. They're balls fast, bursting with incredible amounts of energy, filled to the brim with blast beats [or should I say "blasting" which would be more appropriate], you name it. The drums have everything and there pretty much isn't anything missing. Sure, as hell is a technical deathcore band, the drums don't miss a single beat or measure and never go off time. They follow the guitar and other instruments well and as needed. Though they're relentless and don’t give the listener much of a break, it's never too much. That sounds pretty ironic but it's the truth. Despite the constant blasting and fastness, the drums do have a little variety and lead you out throughout the music until it ends. Pretty much the biggest talk that revolves around this record is about how the drumming is "fake", "computerized", and whatever else. They may or may not be fake, I don't know, but I really just don't give a fuck at all. I've seen Aaron Kitcher's playing on a real set, looks real and fluid to me. I don't even really feel like saying this, but I should. Doesn't matter if the drums are computerized or are over the top crazy, if the outcome is good and I enjoy the way it sounds, it's a win for me. And that's 100% the case here. LOVE the drumming on this album. The snare has a distinct sound and the rest of the set doesn't sound too computery, has a natural enough sound to me, but again; that doesn't matter if the outcome is good.

The guitars pretty much have the same characteristics as the drums. Crazy, random, and unpredictable. While again maintaining those attributes, it still follows through the music greatly and is a total eargasm. The guitar has a peak level "deathcore" sound and tone, your regular deep - dark-esque chug, and it's nice. It's your average deathcore sound but with a slight dark and muddy twist, and it sounds great! The first song off the album starts out with chug-based riffing that repeats itself for a bit, and it's so mesmerizing. I really love the chugging on this album, it lasts out for a little then comes back and hooks you in. The guitars don't hold back aside from the "core" sound and the addictive thick chugs. There are some songs that have insane tapping, some sweeping, wankery (in a good way), and even more. I don't remember which song it was, but there was a part in one of them where the guitars had this certain sound where it was like tapping and sweeping at the same time, and it sounded like a computer being fucked with, as if it were a person being swept off their legs. That wasn't really a great way to describe it, but that's what it sounded like. Shit like that I simply love, sudden parts where the random creativity just bursts out in your face all of a sudden, really good stuff. My main likes about the guitars is the general sound, the variety it has in every way, and the fact that it lets you know it's there and is functioning, and that it'll keep on being active till everything is finished. Beauty.

The bass guitar is present even though you primarily hear the drums and guitars. The bass is definitely hearable and doesn't get fully mixed in with the other instruments, so great job on that. On some tracks the bass will stand out on swift sections, allowing you to hear it even more clearly; and it's some of the most satisfying stuff ever. The bass is played and displayed excellently and is heavy and truly does sound like a natural, thick bass for a fact.

Dan Watson, the vocal mastermind behind this sexy album does an EXCELLENT job at delivering the vocals. I've mentioned that this album does indeed have "variety" previously, but the vocals are definitely the primary role on this album that has the most variety. The album mainly consists of juicy, deep, monster sounding gutturals. It sounds like a monster demanding something, shouting and shouting until he gets what he wants. Honestly the best way to describe it. The gutturals are amazing and are perfect. There's absolutely nothing about them being or sounding try hard, Dan definitely knows what he's doing. Now we got the highs, the screams. If he's that good at gutturals then he's gotta be good at highs (screaming) too, and he sure is! The highs are flawless actually, and it never sounds weak or underdeveloped. The screams last out with the music and they follow every instrument and stop when the instruments stop. There's no lack, no fault, no disadvantage when it comes to this man's vocals. Dan is one of the best, if not THE best deathcore vocalist, and that sure as hell is an absolute fact. Hail this man, he was great live when I saw Enterprise Earth last year.

I don't really see issues with any of the songs. They are all equally different in terms of being generally a different song, and all of them are good and aren't a drag. Before I became fully familiar with this entire album I only jammed certain songs, which you already know is 'Decapitation Fornication' and 'Cuntcrusher'. I tried listening to this album as a whole and didn't exactly vibe with every single track for a long time. The other songs were okay and alright, but it did take me some time to fully love and appreciate them just as much as I did 'Decapitation Fornication' and 'Cuntcrusher'. But the moment I sat and actually gave this entire thing a full good listen, I loved it all. Every song stuck out in terms of being great musically and keeping me focused. I wouldn't say there's any song that is "the least best" or anything, nothing here is crappy, not a single entire song sucks as a whole. There definitely are tracks that are better than others, but the primary focus is that nothing legitimately SUCKS here. And that's what I like about this album. Everything is just awesome as fuck and keeps me entertained and happy. Absolute delicious eargasm, my god.

I absolutely love how chaotic and (in a good way) idiotic this record is. It sounds like you've been grabbed by the leg by a giant gorilla, and that thing is flailing your body around everywhere while simultaneously running down an imploding mountain and screaming in your face. Imagine that but for 55 minutes straight. Fucking insanity, but the good kind. This shit is awesome, heavy, and CATCHY.

In conclusion, this album is furious, awesome, catchy, and indeed brutal. This is definitely brutal, and nobody will ever make me think otherwise. I truly feel disgusting using this term, but haters will definitely hate when it comes to Infant Annihilator, and it sure does need to be said; it's a fact. I'll always love this, don't care what anyone says. The instrumentation is extremely entertaining, the drums are rambunctious, the guitars sound pretty much perfect and have a massive variety in sound and playing, and to top it all off, you have the brutal meaty lows followed by the shrieking loud highs provided wonderfully by Dan Watson. The Palpable Leprosy of Pollution surely is an album that's packed to the brim with features that don't abuse their purpose. (Oh, the irony in that last sentence, lol. But I don't care, I love this.) Every aspect lives up to its purpose, and for the millionth time, this shit is great. It's 100% brutal, 100% awesome, and most certainly one of the best deathcore albums ever made, definitely an essential album that every deathcore fan should know. Even if you're not a deathcore fan, check this out and give it a try. A handful of brutal death lovers (me included) will probably really dig this, just depends. I'll always feel the same way I do about this band and nothing will make it change. I love this, piss off.

There's a few others that are definite standouts, but I don't remember which ones they are because I listen to this album only in full and never a song apiece, I can only remember the song titles 'Decapitation Fornication' and 'Cuntcrusher' pretty much, lol.