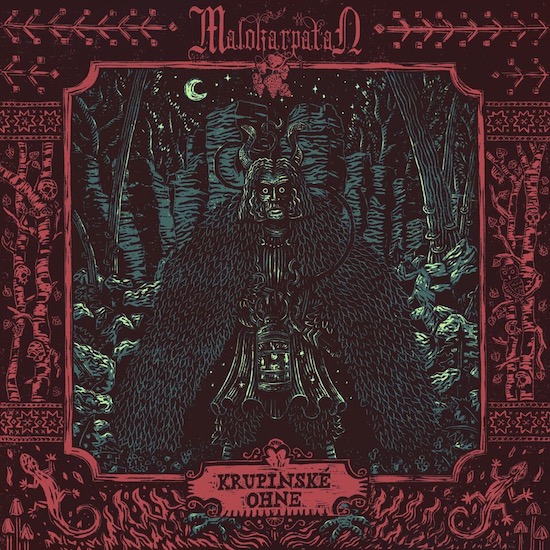 I confess: my first vinyl was not AC/DC, Kiss or even Black Sabbath. As a child, I had some records with fairy tales or children’s stories about trolls, goblins and all that stuff. Almost 45 years later, I feel like I have gone back in time. Malokarpatan’s third album is also filled to the brim with gnomish stuff. Thank God, they did not forget to integrate some metallic parts as well. Anyway, it is not easy to find access to their sound. Firstly, five songs with a playtime of more than 48 minutes are always a difficult configuration and secondly, the crude mix of folklore, atmospheric sequences and black metal sections is challenging in itself. Finally, we are speaking about a concept album and we know that this does not make things easier. Needless to say, the story is about witches, mysterious supernatural apparitions and further stuff for hobby-esoterics.

Imagine an album which has been recorded exactly in the middle between the outskirts of the North Carpathian forests and a dwarfish parallel universe and maybe than you have an exact picture of the sound of Krupinské Ohne (“The Fires of Krupina”). Even during the metallic parts, there is always a kind of magic in the air and some ghostly shadows surround the listener. Speaking of the typical metal sequences, they are formed by vintage riffing (every now and then, the seventies shimmer through), a few straight and speedy parts and, last but not least, the narrative, dark voice of the lead singer. A lot of reverb on his vocals emphasizes the unreal overall picture. Sometimes I am quite unsure whether or not this is a coherent concept, but even after two previous, more or less very well comparable full lengths, the offering of the Slovakian defenders of quirky metal is still charming. Indeed, I wish they would focus more on their harshest side (which is, by the way, not that harsh…), but I also do not feel the urgent need to skip the other sections. Nevertheless, some unusual parts with equally unusual instruments do not work. The third song, for example, would have been better without the primitive keyboard intermezzo in its center. It sounds like a leftover of early Nocturnus and conveys an outer space feeling. Guess this part was contributed by the main dwarf from the other universe.

Does a band have a soul? If this is the case, Malokarpatan’s one belongs to the pretty melancholic specimen. And it has an almost dreamy facet as well. Maybe this is the reason why the guitar-dominated sections do not really create an evil atmosphere. The pretty blurred guitar tone and the voice rule the sound without reaching the medium degree of common evilness. Okay, the mother tongue of the lead vocalist sounds slightly menacing in my ears (and some ohoho-screams in the closer are truly terrible), but this alone does not form an album which can be described as true black metal. So here we have a traditional work with black ingredients and extraordinary additions. Malokarpatan do not lack ambitions, but we know that it is a very thin line between genius and insanity and my silent hope is that they go one step back, returning to songs which come faster to the point. Krupinské Ohne is still a good album with a robust substance, but the band is in danger to fall victim to their own overproduction of ideas. Or maybe I just cannot forget my infantile socialization. My first vinyls told much less complex stories than Malokarpatan.