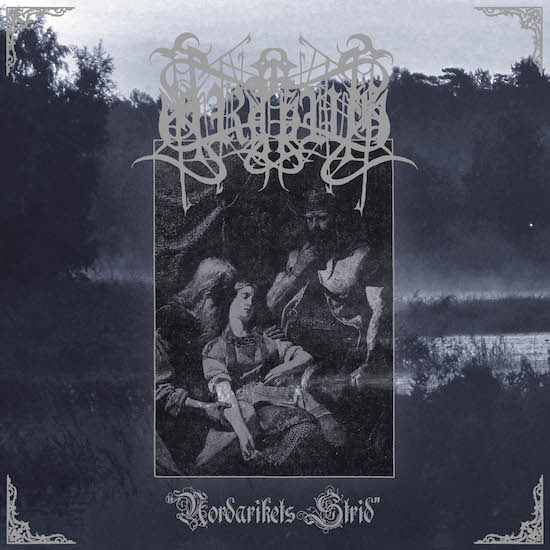 Lik past member of Bekëth Nexëhmü and current member of Svartrit emerges from the dark to aid in conjuring a chill making harsher a winter that already arrives with frostbitten intentions. As far as Swartadauþuz, I don't think he can be credited enough for his sheer musical genius given his involvement with so many other projects of his such as Summum, Azelisassath, etc, all of which have high regard in this obscure surrounding. The duo have joined forces to bless us with yet another spellbinding, stalagmite-pierced masterpiece under the moniker of Greve titled Nordarikets Strid. All of the winter’s chill, the moon’s mystical luminescence and the symphonies of the night are held captive for 40 minutes and given musical embrace.

An aching atmosphere rests upon every song as it swells, swallowing the aura and replacing it with the most dramatic yet tranquil of symphonies. Bitterly-grieving yet sinister vocals casts a chilling temperature over the music giving massive support to the overall landscaping guitar riffs and keyboard synth. From a perspective you're inclined to stand back in gasping awe, observe and absorb the utmost labor with which this labyrinth of lunar delights has been crafted with. Too vast to measure with common vocabulary, the grandiose of ‘Vid Dödens Tröskel’, ‘Det Gamla Rikets Ruin’ or ‘Offerbål till Gudarna’ are to the ears painful yet dripping with a magic only the duo can achieve. The combined immensity of synthesized looming choirs, grieving-passion-felt vocals and constant enraptured riffing goes a distance incalculable to the average listener/critic. Ideal music for the long merciless winter season, frigid all through leaving no room for any sort of warmth to enter.

It's unbelievable the level of prowess that is displayed on Nordarikets Strid; both artist deliver on the expectations and standards that have come to be the norm whenever either is involved with any particular project. Bulls-eye symphonic black metal craft to behold here, never waning, always eventful in moving the listener from place to place. Nordarikets Strid holds an archaic beauty within its frozen moonlit abode, harsh yet elegantly poetic thus shunning the shallow attempts of peasant bands past and present. Purity Through Fire has its sights set on the throne, with releases such as this under their banner they pose a serious threat to other distros. What else is there to come from the duo of Swartadauþuz and Lik remains to be revealed. For now enjoy the serenades to a devastatingly frigid winter blizzard perpetrated by this sub-zero-ice hammer of Nordarikets Strid.