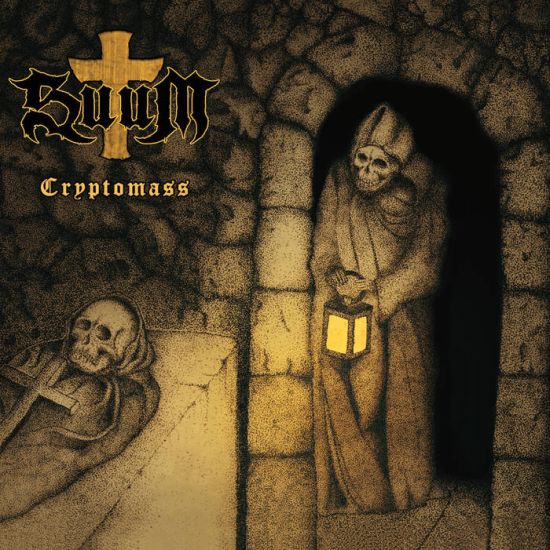 Ever wondered if you merged Candlemass with a bit of Danzig and gothic punk rock vocals what it would sound like?, here's your answer. Italian doom metal band Suum excavates a mass of bones on their 2nd full length record, Cryptomass. Wails ever catacombic anoint the 9 mysteries on this monolith of a record. Where do I even fucking begin with this album, holy cunt is this some sweaty doom metal, I don't know where this band has been but it’s a damn good thing they're still active. Set for a Valentine's Day release, Cryptomass is a love letter written in blood and a bouquet of rotten roses sent to all things doom metal.

Upon descending into the ossuary, I found with pleasure 'Cryptomass' carries all the hallmarks of what a traditional doom metal song should sound like. Both heavyyyy! and eerie guitar power chords, slow booming drums, epic vocals that cape the loud instrumentation and above all, that mysterious sensation we look for when this sweet music plays. Without a doubt, this was the song that hooked and reeled me in, specifically the monstrous opening riff and the exclamatory fashion in which Mark Wolf delivered those caressing and catchy as hell vocals; simply could not ignore it. 'The Silence of Agony' is one haunting as fuck piece; the promotional video shot for it is on target, it absolutely fits the crawling yet pummeling pulse of the combined instruments. This is one of inscrutable beauty and nightmarish mysticism, Wolf's mix of Glen Danzig like vocal signals with that Italian accent is a symbol of refinement on this song and record.

Best track on Cryptomass goes to 'Creatures of the Vault'; my nomination for best performance had already been set as the vocalist Mark Wolf due to his howling throat, but that would soon change. The stage is lit a fire by the scorching guitar solo, a sonic explosion laid down by guitarist Antonio (Painkiller); you want to talk about squeezing invisible oranges, then prepare to guzzle a truck load of organic orange juice. I don't think your ears are ready for an intake of that much audial pleasure, try not to overdose from the stringed sorcery you're about to experience. It's the second-best solo I've heard off a record scheduled to come out in 2020, the best one goes to Worm on their song 'Apparitions of Gloom'. Thus said, I am disappointed Antonio was not given more freedom to on the album to lay down some more of those swaying solos. It's a fault I often find in doom metal generally, but one here it's more fretful this lack of guitar solos and it ticks me off because the songs are setup for such, and the production is even more supportive of it. You'll hear more on 'Burial at Night' and 'Claws of Evil'; other songs have but aren't done in the committed way as was presented on 'Creatures of the Vault' which is a disappointment. Guess you could say I'm a traditional metal head, remember those albums that had a solo on every song, it’s the soul, the identity of the music.

Joe Grave and Fed Kemper are bystanders in all this but take nothing away from their performances they execute their duties to complimenting effect. The bass is audible and follows the leads well, same goes for the drumming, its loud carries a sense of confidence and keeps a consistent pacing. However, I think they had the privilege of watching two classy musicians battle it out on the big stage that not only made their task easier but more enjoyable.

The spear of doom is aimed at 2020, the stench of old grounds arises.

• Cryptomass
• The Silence of Agony
• Creatures from the Vault

• Funeral Circle
• Burial at Night
• Reaper Look in Your Eyes