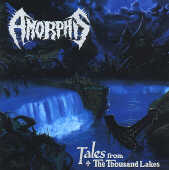 One of 1994’s finest masterpieces of metal “Tales from the Thousand Lakes” sees Amorphis incorporating elements of traditional heavy metal, doom, death metal and '70s progressive rock to craft a groundbreaking album in what became a stunning discography. Lyrical concepts from the Finnish national poem book, ‘The Kalevala’, helped establish the foundation of how “Tales from the Thousand Lakes” tempo would be orchestrated. Utilising strong keyboard sections, mixed with Amorphis’ strong Finnish history and folkish elements, they released a multi-metal genre, faceted album.

Tomi Koivusaari bellows his fierce death voice, (which has now been put down on the past Amorphis incantation, “Am Universum”), combined with some really catchy, folky clean vocals in and between lead guitar riffs by Esa Holopainen, (which also incidentally, are of an extreme catchy nature, overall this is a real catchy, melodic death album).

Amorphis can seem to do no wrong at all, although I really dig their latest stuff (“Am Universum” and “Tuonela”), their older stuff will always hold a special place deep inside me. “Tales...” best tracks are ‘Black Winter Day’, (the track your average metalhead knows Amorphis through) and ‘Forgotten Sunrise’. Ultimately Amorphis to me will always be known as “Tales from the Thousand Lakes”, no matter how many more ‘accessible’ albums they endeavour to produce. Whilst not being on par with more furious melodic death bands and albums, “Tales...” holds an alluring scent all of its own. A landmark album from a remarkable outift.

Bottom Line: For 1994, this stuff shredded, in our present day and present period of metal, the musicianship and quality of the record is still fucking good. Essential chapter in the ever-changing Amorphis saga.