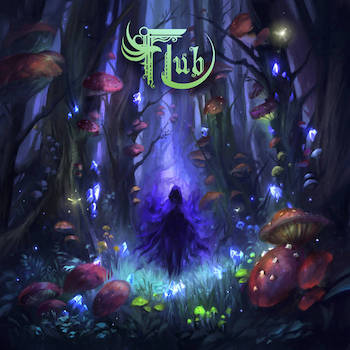 Let's be real here - Flub might be the most un-metal name for a band I have heard in quite some time. To my surprise, it is a real word, but most certainly not one that evokes any sense of, well… metal. Anyway, they are a metal band and that's why they're on this site and really, that's all that matters. Not just any metal - my personal favorite. Technical death metal. Yummy. No more bullshitting about names here, let's shut up and get into it!

Flub, on their eponymous debut record, play a melodic sort of technical death metal that takes heavily from bands like Enfold Darkness, Alterbeast and Inferi. It's rich with lots of memorable melodies from the guitar and the occasional keyboard parts, and features The Black Dahlia Murder-esque vocals lathering the frantic riff work and bouncing melodies. I wouldn't classify it as particularly progressive; it's pretty straightforward for what it is and doesn't try anything new, but it definitely sounds refreshing. Even though the record can be compared to outputs from the previously mentioned bands, it has its own sort of jive to it that will make you say "oh, that's Flub," when you hear it. There's a hint of deathcore influence. Gross, but a tad never killed anyone and I guess I could tolerate it from time to time as long as it doesn't bleed into the music too much.

I'd say the driving factor of the album are the guitars. The bass has some nice parts and the drumming is good, but neither one of them carry a single song like the guitars do for the majority of the record. A lot of solid riffs and really good leads are what make this record standout. The vocals are pretty good, they don't really stand out above any of the other vocalists in the genre, but they utilize some insane highs and really demonic lows, and some… metalcore screams. Bleh. There's also some clean singing on here which is mercifully not horrible, the guy actually has a clean singing voice that isn't completely jarring to listen to. I think if they explored with some more progressive ideas the clean singing would fit a little better, but it's not bad the way it is now.

I guess my biggest gripe with the album is that, while everything is good, I just really wish they did more and I really think they could be an amazing tech band if they did more. This album is less than a half hour long. As I waited for the release of this album, when I saw that it was 27 minutes long, I had to do a double take to make sure this wasn't an EP. Alas, we have only been given 27 minutes to work with and it just isn't enough for the album's true colors to blossom. There are hints of absolute greatness on songs like "Blossom" and "Rise from Your Grave," but even these songs are short and could have been easily some of the best tech songs of recent years if they just expanded a little more on some of the ideas.

For a debut, though, it's really good and I am happy with how the album came out. I waited for it with great anticipation and I wouldn't consider it a letdown, I just think the potential is absolutely huge and that they have a lot going for them. This album just wasn't the peak I think they can reach in the future. I hope that future comes soon, because I can't wait to hear where they go next. Overall, "Flub" is a good album, but way too short. The ideas are definitely there and the musicianship is top notch in all regards, but some seasoning and time could really make them leap from a good band to a great band. As it stands, a good listen for any fans of tech death that want their tech a little more mellow and melodic instead of some crazy spastic acrobats.

Also, one of the best album covers of all time.