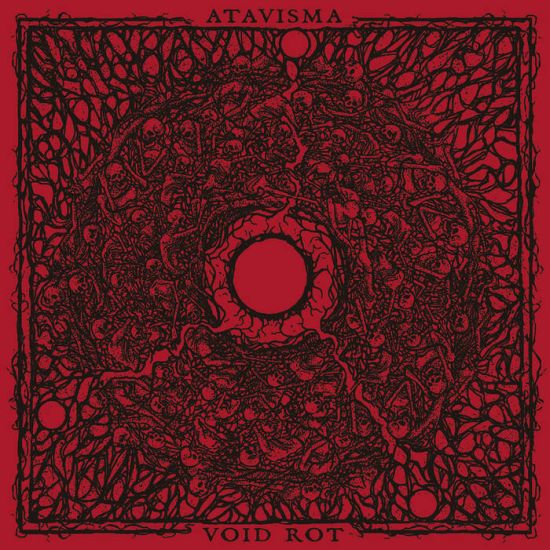 Only recently I had the chance to review Void Rot’s debut demo, a record I thought was unjustly overlooked due to the immobilizing grip Spectral Voice had within the underground. You mentioned the words death/doom in these walks and Spectral Voice was if not the first to fall from someone’s tongue they were among the bunch. Atavisma is pure genius if you think about what they did with their debut album The Chthonic Rituals in 2018. Yet again an album I thought was not given the credit it deserved due to so much happening at the time, so most eyes and ears were already preoccupied with the more headline events. However, the stars would align and the two nefarious entities would meet, together exercising the strengths of their woven craft thus forming this 6 headed beast of a split due out on everlasting spew February 7th, 2020.

If you're not yet familiar with the venomous ways of Atavisma then you need to be if you intend on surviving the gravitational density of their instrumental and vocal structure. Opening with 'Speared Lungs', Atavisma bellows from the deepest depths in foul fashion, gargling the acidious bile and chunks of amputated autonomies. Spread across 3:45 of unconquerable, unquarantined void spillage, the beast that is Atavisma reactivates the spells of The Chthonic Rituals this time with exponential effect as their benevolence for the dark grows to unimaginable magnitudes. Hearing those the growling bowels unearth frequencies un-suppressible that'd only echo through supporting emanations of 'Mould Upheaval' and 'Dread' while the plundering ritual drumming and screeching strings shape the extraterrestrial matter, a blackened absence of awareness contaminates the consciousness in de-fertilization.

Blossoming from the smothered soil, a seed spreading pestilence and plague, Void Rot makes use of the corrupt compost with 'Ritual Invocation' continuing their spiritual tyranny activated on 2018's "Consumed by Oblivion" 'Ancient Seed' and concluded with 'Celestial Plague'. Like defeating some unholy deity only to discover there-in this creature lies another more powerful, vilification of its former self. Void Rot strings together the menacing howls and thunderous bursts to sacrifice them before swarming riffs fulfilling the desire of its output. Still striding with an ambient and rhythmic elegance distinctively marking the band, ‘Necrotic Deity’ breathes feverishly as Void Rot’s best song to date with punctuation. Safe to say, the quartet has fiddled and fondled with their practice to the point of establishing a definite sound, groove and tempo as a principle of theirs. With the finalized face of the beast revealed ‘Accursed Earth’ puts into motion the now developed weapon and with startling results.

With such a colossal sound Atavisma and Void Rot make you feel like the tiniest speck of dust lost and forgotten to a universe of nothingness on this split. Both bands put their better hand at work have in-turn formulated one of the heaviest split death/doom records of the new year thus far.