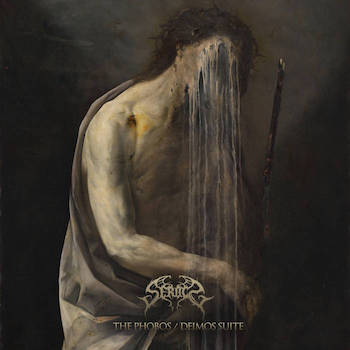 Serocs is one of Phil Tougas’ more underappreciated projects during the seven years he participated with the band. I guess it is more of Antonio Freyere’s baby, considering he played all the instruments before hiring a slew of high-profile session musicians to fill out the rest of the sound. They don’t play live to my knowledge (international projects usually don’t), which limits their visibility in certain spheres. It’s also just that they don’t have as much flashy surface aesthetic as something like First Fragment or Chthe’ilist, either - The Phobos/Demos Suite has more than enough meaty rififng for sure, but it’s presented in a much more janky, obtuse and inaccessible format, even with shapeshifting rhythms and jumpy, acrobatic brutal death metal fretwork that should keep most satiated. They’re just not as flashy when you get right down to it.

It feels weird saying that about The Phobos/Demos Suite, because it seems like it’s filled with moments meant to throw you out of your comfort zone a bit and grab your attention, although I guess oversaturation of technicality usually has the opposite effect. This doesn’t really flirt much with the more meatheaded side of slam, despite being obscenely groovy - there’s an artistry that permeates stupid grooves like the one in “Revenants” with some odd, engaging timing or weird but dirty as hell bass licks. That same song features melodies that showcase the neoclassical, narrative writing that defines the style of Phil Tougas - I find it pops up a little bit no matter what project he’s playing in, or maybe I just notice it because I listen to all his releases like a deranged fanboy. Whatever the case, it works really well on here!

There’s a much thicker low end underlining the crazy noodling. Much of it has to do with the healthier, more well-rounded production in comparison to And When The Sky Opened, but it also sounds like Tougas made his presence felt a little bit more on this album than previous works, or at least the overall complexity and technical ability to play these riffs seems to have taken a step up. Not to say the previous stuff wasn’t difficult either, but it sounded more like 7/10 difficult whereas this is bordering on 9/10 difficulty on The Phobos/Deimos Suite. Spawn of Possession influences are plenty, though Serocs weaves the heavy and the proggy stuff so that they’re both more simultaneously involved, where Spawn of Possession sometimes had more of a rapid back-and-forth jump from chugging, technical riff blitzes to neoclassical wizardry. I do think the Swedish tech scene has a pretty healthy influence on this overall, although the uber-lows of the vocals as well as the chunkier edge every now and then do bring do mind some sloppier influences such as Guttural Secrete.

So, I’ve pinpointed exactly where the specific type of brutal death metal Serocs is known for is coming from, but the real question: do I like it? If nothing else, it’s easily the band’s most professional and compositionally challenging recording to date. While there’s not an immediate appeal to this that hooks you in the same way that some of Phil’s other projects do, the musicianship is clearly there - in some ways it feels like this project is meant to push the limits of groove and complexity within that tech/brutal death setting, and as such, Serocs are one step closer to achieving their ultimate goal with The Phobos/Demos Suite. As for me personally…it’s good, bordering on great at times, but I don’t have quite as much fun with it, and with the sense of scope Serocs has, it does feel a bit long at 45 minutes. If they packed more of the odd curveballs like the weird grower that is “Deimos” at the end, I may be a bit more partial to this - generally, I find this band works well when they mix the highbrow slam with a bit more of an “out there” vibe, like the long, winding twister of a final track. There’s more emphasis on hypertechnical bludgeoning from every direction possible, which is fine enough on its own, but ultimately I feel like the preference for it prevents Serocs from discovering how far they can go. When they pace themselves, this can be fantastic, but some of the songs suffer from “supergorup syndrome” where there’s too many good cooks in a kitchen and they all try to have their flavor be the dominant one. The Phobos/Deimos Suite is still worth checking out if you’re a fan of obscenely technical stuff, and especially if you prefer it to have a bit to an edge to go along with the Necrophagist style noodling.