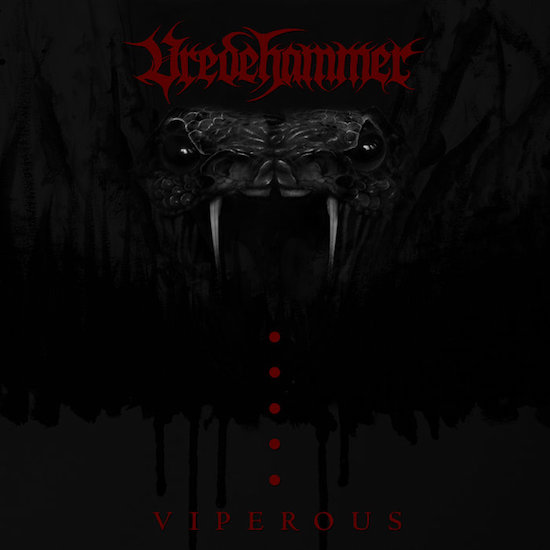 I always thought typical black metal locations are Norwegian fjords in the mist, wintery Finnish forests and church ruins. One could add further places, but dance floors would definitely not appear on such a list. Vredehammer don't give a f**k about this fact and therefore the first 30 seconds of Viperous are misleading. Is this Norwegian black metal or a formerly hidden album of the German jesters called Rammstein? Okay, the dominance of the keyboards ends after 35 seconds, but they reappear from time to time in a very effective manner and do their normal job. In other words, they increase the atmospheric facet of Vredehammer’s music. Yet the band uses this instrument in an extremely competent manner, it’s always supportive without gaining the upper hand. So, of course, this is no Rammstein album, but at least one German dude was involved its creation. Kai Speidel behind the drums contributes very precise Teutonic drumming. His double bass hammering increases the dynamic of the material remarkably.

Viperous does not present extraordinary elements. The commanding raw voice is aligned with the usual subgenre standards. The same goes for the sinister atmosphere. But it’s always a question of the execution and main man Per Valla has written truly stirring pieces. The album can be lucky, because its name fits exactly its content. Vredehammer’s music is, no doubt about it, viperous. All tracks emanate more or less the same deadly poison. One can discuss whether this extra portion of homogeneity is a blessing or a curse for the album. Quite frankly, I do not join this debate for a simple reason. The compositions are just too fascinating, it makes no sense to look for the fly in the ointment. All elements that made this style called black metal great occur grimness, velocity, misanthropy, brutality, darkness and – last, but not least - musical competence. On a side note, I do not hear death metal elements. Neither growling vocals nor extremely low-tuned guitars shape the album and the lyrics avoid zombies, gore and cannibalism. Broad parts of the album remind me of Mayhem’s masterpiece from 1994, in terms of style and almost in terms of quality. Admittedly, Per Valla is no new Attila and the aforementioned keyboards set impulses that did not show up on the legacy of Euronymous (R.I.P.), Yet many sections of Viperous have the vibes we know from the mother of all black metal works and this is truly a Satanic blessing and no Christian curse.

Of course, each and every album needs an adequate production and the here reviewed output does not come off badly in this context. Maybe it is slightly too modern and polished, but its sheer vehemence is overwhelming. It forms a full-length that impresses right from the beginning and only the final track has to struggle in order to keep the enormous quality level. 'From a Spark to a Withering Flame' rather sounds like an old Dimmu Borgir track than a Mayhem classic, following a slightly more lenient approach. In the end, it doesn’t matter. The battle has been won before the closer sets in, because eight doses of viperous sounds cannot remain ineffective.

I already mentioned the homogeneity of the rather compact than complex material and therefore it is difficult to pick out the highlights, but maybe you’d like to check out 'Winds of Dysphoria', 'Aggressor', 'Suffocate All Light'... okay, it doesn’t make sense, I could list almost every single song (but if you force me to pick out my personal highlight, I would probably mention 'Skinwalker' with its infernal riffing – but perhaps another track tomorrow). Given this fact, I like to describe it differently. The original Norwegian feeling of the early nineties will probably never come back, but Viperous breathes the spirit of the ancient days. It revitalizes the ghosts of the past, even though the three-piece has transformed the original mentality into a contemporary musical frame. I am not familiar with previous material of Vredehammer and maybe I should change this state immediately, but I fear the other albums have no chance to challenge Viperous. And honestly, I still need time to experience every detail of this outstanding work. It still grows. I didn’t know that dance floors can be such a great place to be.

Seems like all things are good with black/death metal in Norway. We have The Konsortium, who keep the lead amongst the bands I like the most from this subgenre and it seems this year we have a fantastic album from Vredehammer. I have to admit that listening to their previous albums is my homework for now, so apologies, no references to their previous stuff here. Generally, we have a mixture of black metal and death metal. The death metal parts remind me more of something between Hate Eternal and Zyklon, but Vredehammer managed to present it in way more catchy way.

First of all, we have very unusual keyboards here, resembling some 90s electronic music. Basically, I am not a huge fan of the electronic parts used here apart from one single track - 'From a Spark to a Withering Flame'. This one track shows how these keyboards should have been used in all other tracks. Regarding the rest of the instruments - we have a really good feast here. The drumming done by Kei Speidel is just flawless, it's got everything, it's got speed, it's got good sounding base drums and all kinds of good blasts to do some headbanging. The riffs are also very varied, we can hear a variety of styles, very fast ones in the style of Keep of Kalessin (or at least that's the first band which came to my mind with these ultra-fast riffs with fast drumming), like 'Universal Core', or some slower death/black riffs that I would compare to Swedish Necrophobic, but like I said - Hate Eternal and Zyklon also come to mind very often. My favourite parts are obviously where you can hear those echoes of Ved Buens Ende or Thorns or The Konsortium mentioned before. Vocals are closer to death metal though, most of the time reaching the lower registers, not black metal shrieks. Only on some occasions we have something closer to Posthum vocalist.

This album is definitely not boring, we were even given some solos for our entertainment. Not many, if you ask me, could be a few more to be honest. The tempos change quite frequently, and the whole album is really easy to listen in one go. Although to get all the flavors I would recommend few good listens.

To sum up - guitarwork, vocals, drums - fantastic. Keyboards need to move somewhere past The Gathering's "Always" album. Last track shows potential that it might become more interesting mixture of electronic elements in their music. Obviously that's only my opinion and if you are a fan of these sounds - this album is a perfect 10 for you. And I hope we can hear some more solos on future releases. Oh, by the way - art on this album has been done by Carl from Diabolical.