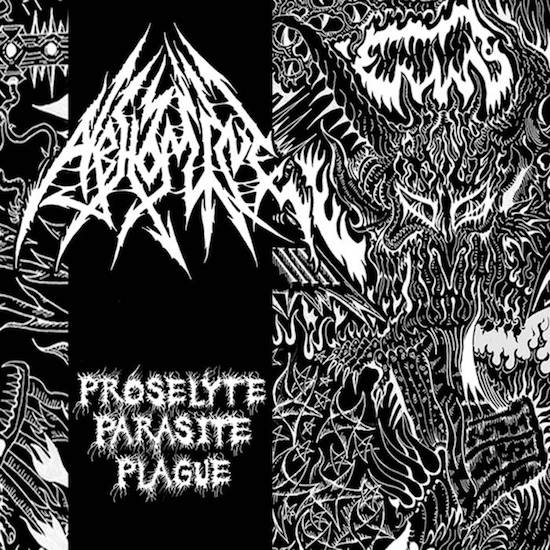 Blasphemous and hateful anthems dedicated to the darkest corridors of the human condition, that’s what you will find in this short in length but relentless release. Abhomine hails from United States, this is their second release and is composed by six blasphemies and two amazing musicians with a long career on their backs. Pete Helmkamp of Angelcorpse fame and Cameron Grant of Crucifier and Grand Belial’s Key. I think this project really thrives on the fact of having these two experienced musicians, they know what they’re doing and they do it well.

The first song 'Heresy Pulpit' hits you in the face without remorse, no intros, no melody, no trends. The structure is simple but effective, torturing the listener with sharp riffs, heretic screams and merciless drumming. Ok, it is easy to enter into the mood of the album, there are no intricate musical structure or complex themes, only hate and venomous wrath. The second track 'Infidel and Unclean' begins with more prominent and audible bass lines giving a more crushing atmosphere to the music itself. The feast of death metal and black metal styles blends smoothly and as I said before, it was easy for me to decipher the musical concept behind. The attack is constant, the songs are short but substantial and succeed to make you feel the blasphemy and hate the band wants to transmit. Proselyte Parasite Plague is an album that holds no pretentions or expectations more than being loyal to the most despicable and hateful principles of underground metal. 'Gogamgoz' keeps with the intense feeling of “I want to bang my fucking head against the wall”, a declaration of principles and a hate letter against commercial music. Next song is 'Blacklist' the longest one in the whole record, showcasing odious vocals that summon darkness and fit like a glove into Abhomine’s concept. By now, you get it, this band is not a tough cookie, if you are really into extreme underground metal; you will jump for joy listening to these glorious tunes. Bands nowadays complicated their music too much in order to sound more hipster and they forget the roots of aggression that ignited the whole movement. Fortunately, Abhomine keeps it real and don't forget that metal is aggressive, hateful and disgusting! The record ends with two more violent attacks packed with infernal riffs that will poison your soul, 'Saracen' and 'Progeny Devoid'.

All things considered, I said that the record was not a tough cookie in the sense that the music is straight forward enough to let you know the band's intention. They just want to unleash hell in the most direct way possible, no melody, no fillers, no intros; only attack, attack and attack. The tunes are all relentless and waste no time building atmosphere, they are ready to destroy your mind and soul. Abhomine is keeping the underground flame alive releasing their second album Proselyte Parasite Plague; a devastating force and a declaration.