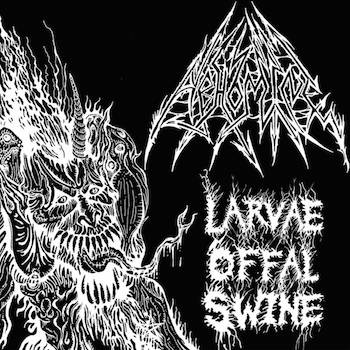 Usually when I write a review, I do it for releases without any reviews but for this one I'm going to make an exception. Why? Well, I'm actually surprised by the mostly lukewarm to negative reactions this one gets. I actually like this album quite a lot, so I thought I'd give it a go and tell the world what I think of it. So, without any further ado, here it goes!

The general consensus from the reviews I've read seems to be that Pete Helmkamp's solo effort is on the "meh" side of things because it doesn't sound like Angelcorpse that much. I seriously doubt that was the concept behind Abhomine in the first place. If that was Helmkamp's idea, he just would have written a new Angelcorpse album. What I hear on this album though, is a man revisiting his roots and doing what he wants to do.

If there's one band that comes to mind, it's Order from Chaos, Pete's first band. This is in huge part because of the characteristic vocals, but also the primitive black/death metal blend on offer here. Backed by a raw, old school sounding production it clearly invokes the spirit of the glorious past. But don't get mistaken, it's not just a throwback to times gone by.

As I mentioned before, I hear a lot of Helmkamp's influences seeping through. For instance, the dissonant riffing brings to mind Voivod's "Rrröööaaarrr" and "Killing Technology" and the songwriting reminds me of late 80's Napalm Death, particularly their "Mentally Murdered" EP. I even hear a slight old school hardcore punk influence, like in 'Kapos and Whores' and 'Blackmaguswhitehouse'. This is raw and aggressive music with it's roots firmly planted in the late 80's and earliest 90's. Come on, what's not to like? Even Pete's interest in industrial music shines through. Not only in the power electronics/death industrial of the album's intro and outro, but also in the aforementioned 'Blackmaguswhitehouse'. The bass guitar/drum part at the start of the track made me think of "Slavestate" era Godflesh and "Embedded", the debut album by Meathook Seed. The combination of all these elements make for a varied extreme metal album firmly rooted in old school extreme music traditions.

Now, take out the cheese because I do have a bit to whine. It's a short album, certainly taken into account that its 26 minutes include the intro and outro. A song or two more would have been welcome. On the other hand, better short and sweet like this one than long and boring.

Taking the current wave of old school revivalism sweeping through the underground, a band like Abhomine sounds all the more genuine to me. With a lot of these retro bands I get the feeling that they are just like your average rockabilly band. Sounding like back then whilst looking like back then. Abhomine knows how to steer clear of this by writing great extreme metal with the right old school spirit to it, not sounding contrived or fake at all. And for me, that is reason enough to love Larvae Offal Swine.