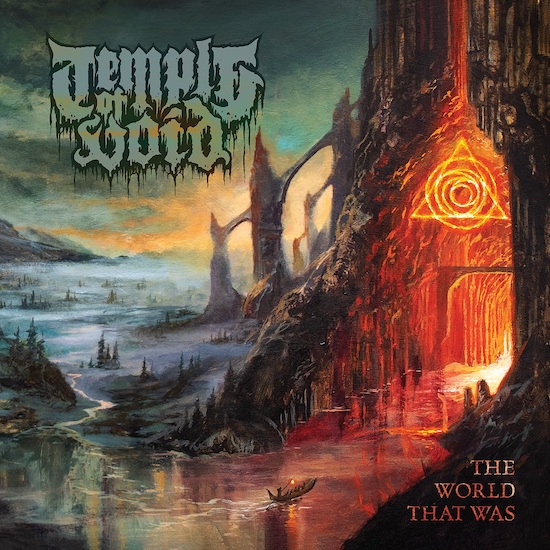 Buy on: Bandcamp
Type: Full-Length
Release Date: March 27th, 2020
Label: Shadow Kingdom Records
Genre: Death, Doom
1 A Beast Among Us
2 Self-Schism
3 A Single Obolus
4 Leave The Light Behind
5 Casket Of Shame
6 The World That Was
MetalBite on YouTube

I had to take a few steps back and re-approach Temple of Void's newest album The World That Was, from an angle that would be fair to the band, because at first listen though enjoyable, a struggle to find its place in their discography seemed tedious. Some may have seen the updates members posted implying the sound and overall expression of The World That Was would take a different route contrast to their 2 previous records, which after seeing the statements were at the least worrying. How much of their identity would be sacrificed to make this new record lingered as a troubling thought, since knowing when bands get too ambitious, sometimes their aspirations backfire. Excessive change is not often well received, especially for someone that has kept up to date with a band and grown accustomed to their ways through the years. However, what may be easier said than done, remained a necessity for Temple of Void on The World That Was as to not alienate their supporters. Their music has always had some melody/rhythm, if you record their debut full length Of Terror and the Supernatural that under its heavy and brutal foundation there persisted some amount of hum. However, The World That Was, from the way it was described, implied a less routine and more experimental axis would assume governance over the powerful currents of the atmospheric death/doom metal plane.

Leaving behind some of the band’s prime characteristics in pursuit of this new chapter in their music would not sit too well with some listeners; however, Temple of Void understood just how much it meant that they did so cautiously as to retain the fundamentals of their identity but still achieve the goal of The World That Was. ‘A Beast Among Us’ and ‘Self Schism’ though only tiptoeing around the idea of an atmospheric approach still deliver a pragmatic combination of Temple of Void’s heaviness and some level of ambiance to signal where the material would be heading. And man does it arrive two-fold on one of, if not, the best track on The World That Was, ‘Leave the Light Behind’. Eerie, slightly poignant and bouncy; in some ways, even reminiscent Of Terror and the Supernatural era. While ‘A Beast Among Us’ and ‘Self Schism’ played with the idea, ‘Leave the Light Behind’ committed fully to the vision thus launching the album into new territory. The instrumental ‘A Single Oblous’ leading into ‘Leave the Light Behind’ was very effective if you think about the acoustic arrangement and how it bleeds into the entry even-so emphasizing the transition from a less atmospheric and ambient sector to one that is of a telling temperature in the bands temporary departure from their customs. The quirky, electronic, extraterrestrial-sound-effects at the beginning of ‘Leave the Light Behind’ create a gloomy feeling all the while wondrous which may be what Temple of Void were aiming for as a recurring theme. You stare at the artwork so vivid and colorful while hearing the music playing in your head comes as a gratifying and worthwhile experience on The World That Was effectively escorting the listener through the album.

Altogether the music offers a relaxing feel; that’s a quality somewhat ubiquitous on the record. Exceptionally amalgamated and handled, from the first to final notes played to the growling and clean vocals featured on 'Leave the Light Behind', The World That Was is courteous and considerate in having both seamless flow and positioning, with the latter being an aggregate of the former. While ‘Casket of Shame’ could be placed alongside ‘A Beast Among Us’ and ‘Self Schism’, judging by its eyeful formula, it does offer slightly more tune to end up on the atmospheric side of the album, the b side and the most convincing section of the record. Bringing me to the point of why The World That Was is so effective at what it does; you'll notice that with the progression of each new song, the atmospheric qualities heighten, they become more prominent in the music, therefore building the tone of the record. With 'Casket of Shame' positioned in the track-list as a medium between ‘Leave the Light Behind’ and title track ‘The World That Was’, thus it be said the album’s instrumental economy and variety keeps the songs moving whilst erasing any trace of nullity that could have potentially harmed the music. An excellent though experimental album in Temple of Void’s catalog; however, I would like to see them return to the past, write more of what was featured on Lords of Death, that chapter deserves to be explored more.