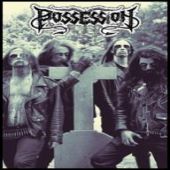 Due to my limited financial resources, I am usually not interested in buying demos and to be honest, I was not aware that His Best Deceit is one. Anyway, one has to know this fact, because the vinyl, released by Iron Bonehead, does not sound like a demo and, better still, the song-writing also does not indicate that I am listening to material of beginners. Okay, the guitar lines of the first track have a slightly clumsy touch. Perhaps the band wanted to pay tribute to Sodom's first EP, especially to "Blasphemer". But generally speaking, the EP does not spread that very early Sodom-typical, special charm of furious incompetence. All tracks show a quite mature configuration and they do not fall victim to an overdose of juvenile yet directionless energy.

Possession enter the ranks of the extremely sinister Belgian black metal squadrons and those of you who can listen to Enthroned or Slaughter Messiah the whole night long will have a new soundtrack for the next ritual sacrifice. One must know that the production has nothing in common with a typical demo recording. The dark guitar sound ensures a frightening overall picture and the hateful lead vocals (with a lot of reverb on it) underline the effect of the morbid leads. The title track is like a black hole that intends to engulf the audience and it gets more and more obvious that the band knows no mercy. Even the mid-paced mid-part reinforces the impression that the apocalypse has begun. The vocalist adds some painful cries and I wonder how debutants can write such a good song while some veterans still haven’t penned just one track of this quality (greetings to… okay, it doesn't matter.)

Possession's first output does not reach the quality of the absolute champions of the black/death genre. The excellent gloominess that Necrophobic (who else could be the kings of the genre?) convey with their melodies is missing. Yet this is no problem at all, because the material of the band still has a lot of impressive features and the Sepultura cover blends seamlessly with their own material. The vinyl offers a further adoption, Sodom's "Christ Passion". Although Possession do not add some individual features, this track does not only lengthen the playtime. It is also well aligned with the songs of the Belgians and so its presentation makes more or less sense. All in all, this is more than a promising start, it is a kind of explosion with one or two soon-to-be-classics. Thank Satan I did not know that it's just a demo on vinyl.