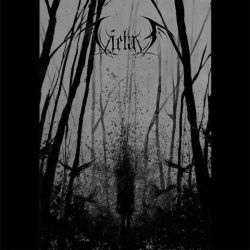 Some things never change and the music of the dude from Belarus belongs to these phenomena. Vietah’s fourth full-length is another lesson in dragging rhythms, dramatic melodies and emotional states which mirror desperation, loneliness and melancholy. Yet even though there is nothing new in the portfolio of the lone wolf, we can identify a minimal change. Unlike the first albums, Czornaja ćviĺ refrains from any form of keyboard-dominated ambient tracks. Good decision in view of the fact that the full-length consists only of four tracks (with an average length of eleven minutes – if you like to consume musical fast food, you can stop reading right now).

Antarctis, the man behind the project, follows his visions strictly and this means that mid-paced or even fast sequences do mostly not show up (the second track on the A side marks the exception). Thus, total speed maniacs will not enjoy broad parts of this album and the same applies for fans of songs that offer breaks in abundance. Vietah prefer the meditative facet of black metal. To put the focus on a small number of riffs per song in order to develop their hypnotic effect is a good idea – as long as the riffs work. Generally speaking, this is the case here, even it would have been fine if Antarctis had emancipated himself from the superior art of Burzum’s masterpieces. Some guitar lines of the closer lie in very close proximity to some of Varg, to express it mildly. Or am I just like Pavlov’s dogs and Burzum comes to my mind inevitably whenever I hear this kind of sound?

There is no filler on this album, but a little highlight. “Reflections in the Black Water”, the opener of the B side, puts the other tracks in the shade due to its mighty riff, its dense atmosphere and the invoking chorus. This song is like heavy snowfall at night, pretty monotonous and silent, but at the same time cold, relentless and unforgiving. A majestic opus, no doubt about it. It profits from the gloomy and well-defined production that emphasizes the guitars and the keyboards simultaneously. The third element is the guttural voice, although Antarctis has to struggle in order to be heard. Maybe the sound engineers should have given the voice a more prominent place. At the end of the day, it doesn’t matter. The album does definitely not suffer from an inadequate sound and so it has enough to offer for friends of elegiac black metal. Only those of you who are tired of listening again and again to the sound that has been invented roughly 25 years ago are well advised to keep aloof from this work. Maybe it sounds predictable, but its solidity is out of question.