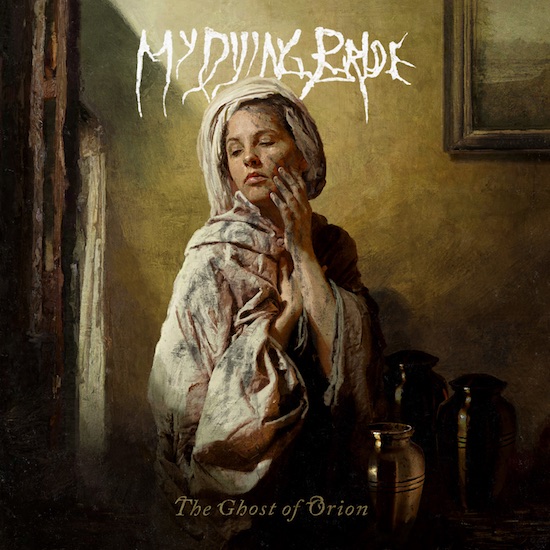 After a long 5-year wait, the new record The Ghost of Orion has finally arrived. As has been well publicized, the band was deeply impacted by personal and band-related issues that were far more important than completing the new album, leading to the lengthy delay. Unfortunately, The Ghost of Orion is perhaps their weakest full-length release to date. Although the band has put out some largely excellent records over the last 20 years (namely The Dreadful Hours, A Line of Deathless Kings, and Feel the Misery), this record suffers from a distinct lack of consistency. There was a time in the early 90's when this band could do no wrong, when nearly every riff and melody on their records was sublime. Since then, consistency has plagued several of the bands’ records (particularly evident on The Light at the End of the World, For Lies I Sire and The Ghost of Orion). Roughly 50% of the riffs on this record are of a high quality and leave a lasting impression, infused with the mournful beauty of an autumnal lament. Unfortunately, the rest of the riffs lack conviction, strong melodies, and memorability. This is especially disappointing considering the long wait and knowing what the band is capable of.

Let's start with this: it is wonderful to simply have another My Dying Bride record. According to the band, this record very easily may not have happened - the fact that the band persevered and regrouped is admirable. In addition, 'Your Broken Shore' and 'The Long Black Land' are monumental compositions. The former has the best vocal melodies on the LP, searing harmonized guitars, an extensive use of ethereal violins and cellos, and a dominating vocal performance by Aaron Stainthorpe. Aaron moves seamlessly from clean singing to monstrous growls and is creative with his choices here. The latter is monstrously heavy and (along with 'The Old Earth') is as close to moments of death metal that you will get on this LP. The guitars are crushing and there are lumbering single note doom riffs throughout the song (equally melodic and powerful).

The use of violin and guitar harmonies has increased exponentially since the last release, and the band has tried some new and interesting ideas (see the layered guitars on 'The Solace'). Many of these melodies carry a graceful sadness and forlorn beauty. Solid performances are provided by each of the musicians on their respective instruments. Despite these attributes, the record is damaged by an obvious lack of consistent and quality material. As mentioned above: in almost every song you can quickly go from a very effective, majestic moment of grandeur to a section that is average and prevents the song from reaching the heights My Dying Bride is capable of. The frequency with which this occurs multiple times in the same song (and in most of the songs) is concerning. Many of the riffs and melodies simply don't land and come across as uninspired - they are simply 'there' in the song. There is also an air of predictability, as if I know the next note that will be played on the guitar in the basic melodic scales that are used almost exclusively here.

Aaron's vocals sound technically superb overall, especially the growls. The growls are absolutely pummeling and elevate every section they appear on, even making a somewhat average riff sound better. Multi-layered vocal harmonies are utilized, unlike any in the bands' history. There are also occasions where the growls and cleans are layered during the same vocal line, a rarity for this band. Unfortunately, this is overshadowed by a lack of memorable vocal melodies. Although Aaron's performance is technically excellent, his clean vocals present relatively few moments that reach the quality of the melodies he brought to life on many previous recordings. The vocals are often too plaintive, exacerbating the lack of memorability. There’s nothing here quite capable of reaching the heights of the vocal lines on 'Thy Raven Wings', 'To Remain Tombless', 'I Almost Loved You', 'Your River', 'Black Voyage', 'Two Winters Only' or many other classics (with 'Your Broken Shore' coming closest).

The Ghost of Orion features a distinct lack of darkness. If you are looking for cryptic and unpredictably wicked chord progressions, you are out of luck. The obscure darkness found on their early 90's material, the Barghest O' Whitby, or many of their other albums is glaringly absent. The death metal element here is strictly limited to about two slower/heavy riffs on the album – Aaron's growls are often featured atop traditional melodic doom riffs that have no relation to death metal. I honestly hesitate to affiliate the phrase 'death metal' to describe this record at all (apart from the intermittent growling). On the positive side, a consistent autumnal tone/atmosphere envelops the record. The atmosphere conjures visions of desolate hillsides, barren trees among fallen leaves, and a solemn figure weeping beneath the rain. It's very clear this was the bands' intention, and with this they have surely succeeded.

Another major culprit here is the lack of diversity and dynamics. While the album admirably maintains its’ graceful sadness and tone from beginning to end (as I believe the band intended), the variety and diversity on this record is sorely lacking. There is basically one tempo throughout – relatively slow. There is an almost complete lack of the unexpected - it is very predictable that each song will have a clean guitar section and that the tempo will never change. Although there are very heavy riffs and brutal growls on several of the songs, there really aren't any particularly aggressive moments on the record. An hour-long record needs to be nearly perfect in every area to survive operating at one tempo, and this record is not. With almost every riff resting comfortably in the same 'safe' melodic zone, the lack of diversity, dynamics, and tempo changes end up harming the record significantly.

Ultimately, the crushing blow to this record was Calvin Robertshaw leaving the band. I was very excited about Calvin returning to the fold in 2014, as he was a founding member who had written and contributed to many of the bands greatest and most groundbreaking material. You are left wondering what may have been had he written half of the material and had worked with Andrew to reign in the quality control. If both guitar players agree a riff is excellent and help each other filter out everything but the absolutely strongest material, the result is a record of superior quality. To my understanding, Calvin left near the beginning of the writing process as he was concerned with all of the points mentioned above (a lack of the following: aggressiveness, dynamics, diversity, the riffs and tempos being too similar and predictable, etc). The final product was drastically impacted by his departure, and Andrew simply does not fare as well here as he did while solely writing 'Feel the Misery'.

Given the information above, The Ghost of Orion is slightly above average - I cannot recommend it as essential listen for fans, or as a starting point for those new to My Dying Bride. It is not a bad record, but it leans too closely towards bands like Swallow the Sun (see the negatives listed above). I find myself asking: can a record in this genre succeed while operating at basically one tempo, with little diversity or dynamics, with a near complete lack of aggression and death metal elements? As My Dying Bride themselves have proven, it certainly can (see The Angel and the Dark River). Sadly, there are no tracks on this record that match the timeless majesty of 'The Cry of Mankind', 'From Darkest Skies', or 'A Black Voyage'. Whether it be the quality of the violin or vocal melodies, the consistency of the guitar riffs, or the overall memorability: this album simply cannot reach the heights of the band's best material.

The recent history of My Dying Bride is quite faithful to Nietzsche's rather old, but apt statement: "What doesn't kill me makes me stronger."

It can't be said that My Dying Bride has returned with a new album stronger than ever before, but certainly The Ghost of Orion is the band's best album for at least a decade (I would even lean to the thesis that it's the best effort since the sensational A Line of Deathless Kings from 2006).

Celebrating the 30th anniversary this year, the Brits not only had to face band turbulence, which wasn’t a new situation; the guitarist Calvin Robertshaw left the group yet again, while later drummer Shaun Taylor-Steels followed suit soon after. With a cancer diagnosis in September 2017 for his then-five-year-old daughter, singer Aaron Stainthorpe cast an undoubted shadow on the activities of My Dying Bride, and, in fact, put the overall formation in question.

And yet the band did not give up. Further, when it seemed that the downward trend was inevitable, as evidenced by several clearly weaker records (including a really misunderstood Evinta and the particularly unsuccessful Feel the Misery from 2015), the band came back quite unexpectedly with a very successful album. Stainthorpe himself declared that nothing can stop My Dying Bride, and there is genuinely something to that. Perhaps the band which based its entire activity primarily on the subject of suffering needed another catharsis just to return stronger and more cemented. In addition, after almost 30-years in the ranks of Peaceville Records, MDB returned under the colors of a new label, Nuclear Blast, which seems to strongly support the British doom metal veterans.

Similarly, as with the previous album, guitarist Andrew Craighan worked alone on the entire The Ghost of Orion material. This time, however, there emerged quite a different effect. It is difficult to say to what extent the recent events affected the music layer of the disc, but certainly their traces can be found in the lyrics of Stainthorpe, especially in the sickness of the daughter-themed 'Tired of Tears', the best next to 'Your Broken Shore' and 'To Outlive the Gods' tracks from the album. The three mentioned (plus 'The Old Earth' and 'The Long Black Land') are essentially classic My Dying Bride compositions, offering everything that the band has made us used to expecting in the past. Even if Stainthorpe's vocals sound a bit different today than the characteristic sobbing filling classic albums from years ago, which will forever remain one of the key hallmarks of My Dying Bride, it matters very little.

What's more, there were surprises abound, even though the My Dying Bride of the past did not spoil us with those all too often. While the guest role of cellist Jo Quail smoothly fits into the band's instrumentation, 'The Solace', which Linda Fay Hella (Wardruna) sang, is really something completely new. The same is true with 'Your Woven Shore', enhanced with choirs and 'The Ghost of Orion' with whispers floating somewhere in the distant background. Both of the short and basically instrumental songs are rare by the standards of the band. Even if they are just fillers added to the disc due to Stainthorpe's limited availability, the end result is really very decent.

I would like to be wrong, but I can't imagine The Ghost of Orion attracting new fans to My Dying Bride. Classic, melancholic doom metal has never been a good recipe for staggering success, and ten-minute tracks are probably too much of a challenge in an increasingly rushed and impatient world. It is important, however, that the band still did not say that this is the last word and can still offer a lot. The Ghost of Orion has enough advantages to influence old fans, and not only by the power of sentiment; sentiments are obvious in the music world, but many other bands, once mentioned in the same breath next to MDB, can only count on them.