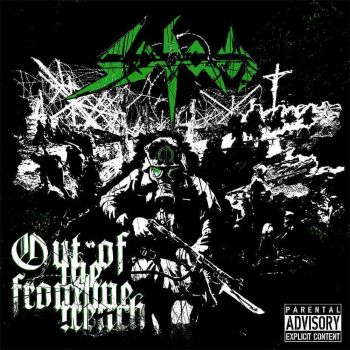 I always read that no one can earn money with EPs anymore. I am therefore surprised that the still relatively new Sodom quartet seemingly consists only of idealists. I like Angelripper, but this was new to me. Either way, Out of the Frontline Trench is another EP and marks the second official release of the actual line-up. Naturally, I intend to focus on the trio of brand-new songs and the first thing I can say is that I appreciate the musical consistency of the band. Its last lukewarm period began with Sodom and ended with In War and Pieces. Since Epitome of Torture, Angelripper has given the world nothing else but bone dry, slightly blackened thrash of the more vehement kind. Modern classics like “S-O-D-O-M”, “In Retribution” or “Conflagration” have demonstrated the band’s unbroken lust for battle. Thus, the question is whether the new songs, or at least just one of them, can keep up with the aforementioned jewels.

The first song that falls by the wayside is “Down on Your Knees”. The riffing is weak, because it does not create a terrifying atmosphere, the melody of the chorus is going nowhere and the slow part after the chorus kills the last hope of an improvement. Despite a natural heaviness (we are still speaking about Sodom), the track is neither fish nor fowl and the solo also just lengthens the EP. A typical non-album track, maybe too good for the bin, but too bad for a full-length.

The further new songs save the honor of Sodom. I do not see them on a par with my personal classics of the recent past, but especially the title track grows constantly due to its menacing melody at the beginning of the verses. Its straightness reminds me of glorious “Agent Orange” days and both the smooth yet violent bridge and the sinister chorus add value to the song. The howling solo guitar also pays tribute to the golden decade of metal and this makes me grin venomously. The EP opener marks the harbinger of the next full-length – hopefully “Genesis 19” does not belong to the highlights of the future work. It’s a serviceable song with a good instrumental mid-part that relies on a strong, effectively repeated guitar line, no more, no less.

What about the rest? Tom might be right when saying that nobody can cover “Agent Orange” as good as his own band, but this alone gives no indication why we need a new version of this song at all. The same goes for the live cut of “Bombenhagel”, even though it comes with a new “Ruhrpott-ending”. Good songs, but they are like me: almost older than time itself. So please do not expect me to get crazy about this material. Frankly spoken, it could have been a quantum more velocity and a bit more high-class violence, not in terms of the absolutely flawless production, but with regard to the song-writing of the new tracks. Anyway, this is Sodom and Sodom is Angelripper and Angelripper is good – or at least good enough for a rating of 7.